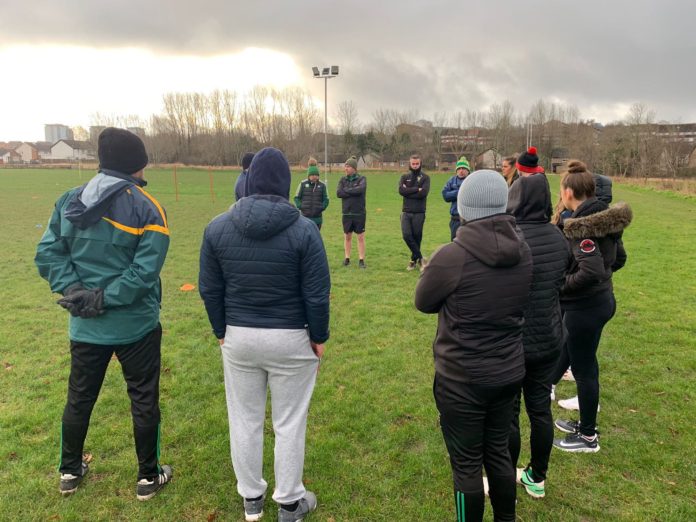 TÍR Conaill Harps started off 2022 in extravagant fashion with the reveal of their new club crest. Designed by club PRO officer Chris Coll the design represents a new modern look and feel for the club.

“There have been major positive changes within the club in the last few years since Anton Gallagher has taken over as chairman,” Chris said. “With so much going on it’s a very exciting time to be involved with Tír Conaill Harps and we wanted this new club crest to represent that. We’ve held onto the original deign but tried to modernise it slightly to represent the new direction of the club.”

The club’s youth training has also recently started back with training taking place on Fridays at Merrylee Primary School. As soon as the Christmas holidays were over, the kids were eager to get back out playing Gaelic football once again. Last year Harps went on to claim the U-12s Scottish Championship, and the club want to build on that
success going in to 2022 as they look to continue their growth and recruit even more youngsters into the sport.

A huge part of the success last year was down to the excellent work of the coaches within the club and as part of Harps’ development going forward, they held a coaches workshop at their home at Cambuslang. The attendees were shown the fundamental skills for a coach at youth level. With so much interest, the future looks bright for the club.

The Harps are also hard at work making final preparations for their annual dinner dance, which will be held at the Marriott Hotel in March. As one of the biggest events in the club calendar Tír Conaill always manage to put on a fantastic night of entertainment, which, in turn, helps to raise vital funds needed to support the running of the club. This year will be no different with an excellent night of music and entertainment in store.

2022 will also see the major works begin as part of the pitch redevelopment at Cambuslang. As Harps now start to settle into their new home, they will be looking to make some changes, with the playing surface being the main priority. The club want to bring the pitch up to standard and make it safe and usable all year round for training and hosting Gaelic games.