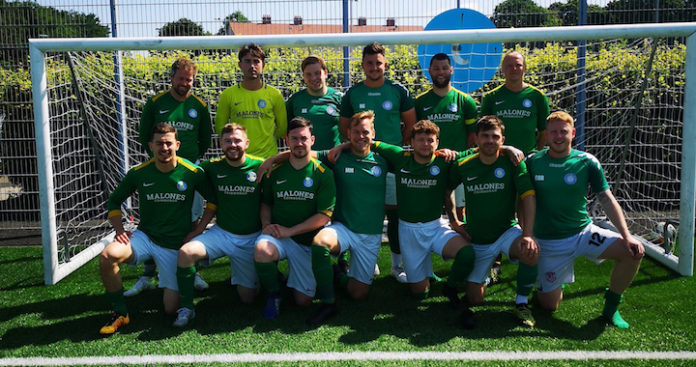 EDINBURGH Harps and Glasgow Irish rekindled their friendship off the pitch recently in the annual Jason Lyons Memorial match with Toryglen in Glasgow playing host to the 2021 game.

Glasgow Irish had held on to the trophy since 2019 with last year’s scheduled match cancelled as a result of the travel restrictions imposed by the Covid-19 pandemic.

The Harps have benefitted from playing in the FN Teamwear Summer Cup—a tournament designed to give teams pre- season game time with a competitive edge.  The Edinburgh side won two, drew two and lost two of their six fixtures, scoring 12 in the process, against Edinburgh-based teams Restalrig (1-1), Burgh Vale (4-2), Ferniebahce (2-1), Tollcross Thistle (0-8), Vittoria Group (1-1, won on penalties) and Bingham Athletic (4-5).  The run of results saw the Harps make the quarter-finals of the competition only to be undone in a thrilling match for the neutral against Bingham with Ryan Hammil netting twice and stalwart Craig Lamb continuing his pre-season form by getting on the scoresheet.

In Glasgow, the Harps looked comfortable in possession throughout, controlling the ball for large periods of the game. The possession dominance was converted into two first-half goals with new signing Dylan Du Rossi bravely getting on the end of a dangerous Adam Kerlin cross and an own goal stemming from a Cormac O’Brien corner.  O’Brien has looked fantastic in pre-season and has started to control games from midfield once again with a fantastic performance in Glasgow capped off by his penalty conversion just after the Glasgow Irish had converted a penalty of their own to level the scores at 2-2  Scott Lynas completed the scoring for the Harps late on, seizing on a defensive mistake to round the keeper and calmly slot home to ensure the trophy was coming back to Edinburgh.

Both sides are supported by sponsors Malones in their respective cities, with the Glasgow bar kindly hosting the post-match congregation for both clubs to enjoy.

The Harps have welcomed new Manager Tommy Hamill to the club in what is an exciting time for the club, with several senior players stepping into committee roles.  Under Chairman John McClarey, the Harps look to have a new lease of life, bolstered by some fantastic club fundraisers delivered throughout lockdown to keep the community connected.

The Harps have just one more pre-season match up before league action kicks off on July 31, with five fixtures in the space of two weeks looking set to provide a frantic start to their campaign. Hopes are high going into the season with some exciting new signings and the return of some experienced heads to the club.