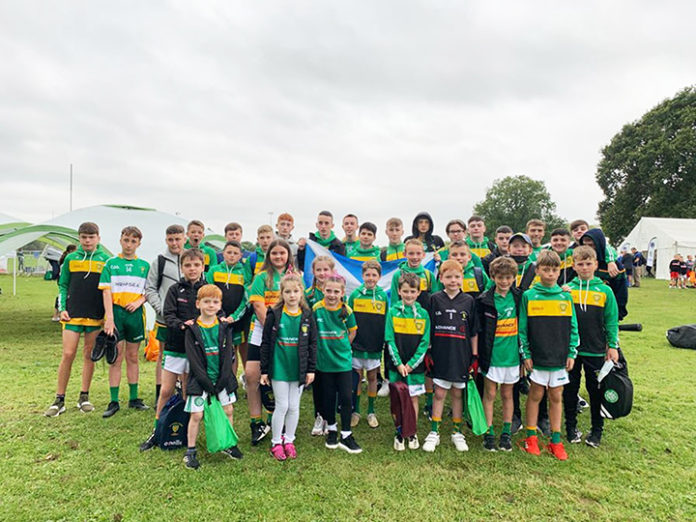 THIS year saw Tír Conaill Harps enter three teams in the All-Britain Championship in London—the club’s U11 mixed, U15 Boys and U17 Boys.

Last month, a double decker bus set off from the Kings Park area of Glasgow to make the eight and half hour bus journey to London. Excitement built throughout the journey for all the young players as they got closer to London, as it was most of the young players first trip to the English capital.

On the Friday evening upon arrival at the hotel in the Wembley area of London, bags were dumped in the rooms as all the young players made their way to the iconic Wembley Stadium for photos and to stretch their legs following the long bus journey.

An early rise on the Saturday morning saw the U11s and U15s participating in their matches at Greenford Playing Fields, home to Tír Conaill Gaels GAA London. As all the other participating teams arrived at the venue, the reality of the size of the event hit home to all the players.

The U11s played brilliantly on the day and won two of their four matches. The U15s lost their matches but the team was largely made up of U13s and U14s who will have gained great experience for when they return next year’s event.

Following the matches on the Saturday, the Harps club committee had arranged for everyone to go and watch the All-Ireland Final and have dinner in a venue in North London. Everyone sat back, relaxed and enjoyed some much needed refreshments as Tyrone were victorious in winning the Sam Maguire.

Another early rise on the Sunday morning saw the U17 Boys participation in their matches sadly come to an end as they lost in the Shield Final by a point in extra-time. The squad had been depleted by a number of injuries throughout the tournament so to some so close to winning something was a great achievement.

As soon as the matches were finished on the Sunday afternoon, the coach was packed as it returned to Glasgow late on the Sunday evening.

A brilliant, but exhausting, weekend was had by all, and well done to all the players and parents for making school and work on the Monday morning.

Harps hope to return to the All-Britain Championships in 2022 and build on the success of this year.