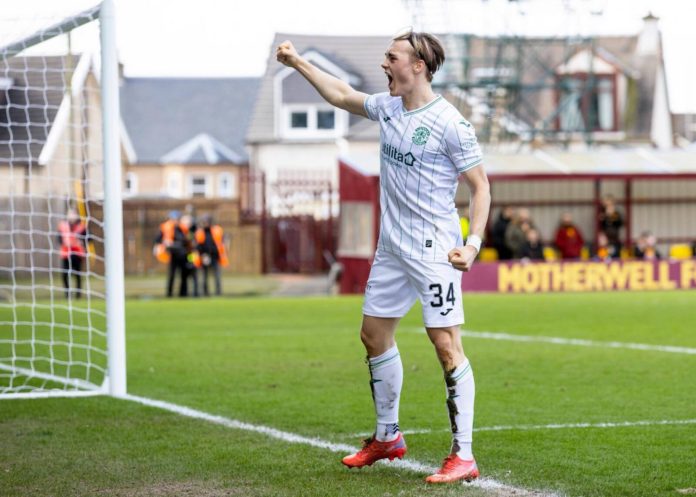 SHAUN Maloney’s Hibernian side has reached Hampden and the Scottish Cup semi-finals, meaning that the Hibees have reached the later stages of the last six major cup competitions—a magnificent achievement.

Indeed, in the last 22 years no Scottish club outwith the two big Glasgow sides has visited the national stadium more for big matches.

Hibs’ latest trip to Mount Florida was secured by a hard fought 2-1 victory over Motherwell at Fir Park in the quarter-finals. Prior to this match, Hibs had never beaten the Steelmen at Fir Park in the Scottish Cup. That little hoodoo is now vanquished.

An early red-card for Well’s Beavis Mugabe in the match doubtless helped Maloney’s men in their endeavours, yet they were good for the win, with new striker Elias Melkerson opening his Hibs account with two fine goals. The huge Hibs support present at Fir Park played their part, too, boisterously backing their heroes with songs and chants. The performance on the day was night and day from that woeful evening at Fir Park back in January, when the green jerseys drew 0-0 and didn’t manage a notable goal attempt.

In the previous cup round, the Cabbage had to come from behind up at Arbroath, but eventually ran out comfortable 3-1 winners, with goals from Kevin Nisbet, Demetri Mitchell and Chris Mueller.

In the league, the team currently sits in fourth place, despite some insipid performances and a barren run in front of goal the like of which hasn’t troubled the club since season 1987-88. Back then, youngster Paul McGovern scored the only Hibs goal in a seven match shot-shy streak for Alex Miller’s men.

Hibs have only won one league match since Boxing Day’s 3-1 win over Dundee Utd. That subsequent 10 match run has included five goal-less stalemates and four narrow defeats. The only victory was a 2-0 home win over Ross County back in February, in which Irishman Jake Doyle-Hayes bagged two stunning strikes. The indifferent form hasn’t put off the Hibee faithful, with almost 15,000 fans attending the match against the Staggies. Hibernian’s most recent league match was a 0-0 draw at home to St Johnstone in front of almost 20,000 fans, with supporters fully embracing the club’s laudable ‘football for a fiver’ scheme.

Before that eagerly anticipated next trip to Hampden, the men from Leith have three league matches to take care of—Aberdeen at Pittodrie, Dundee United at Easter Road and then an Edinburgh Derby at Tynecastle. While the fact that Hibs currently sit fourth in the table is reassuring—and suggests possible European qualification for next term—it’s also worth noting that the Hibees are just five points ahead of tenth placed Aberdeen. Maloney’s men will need to find their shooting boots soon in the league or they may find themselves rapidly descending the table. If the goals start to come, Hibs can finish the league season a high, if they don’t, they could easily end up facing the ignominy of playing in the bottom six— such is the tightness of the Scottish Premiership table.

Fans do, however, need to be patient. The new manager has radically altered the way that Hibernian play the game we all love so much. New systems take time to implement, and Hibs’ new, continental, patient style of play may well need full squad overhaul in the close season for it to be effective. New boys Melkerson and Jasper look to be superb additions to the side and will hopefully compensate for the losses of Martin Boyle and Kevin Nisbet up front.

Perhaps we shall not see the true mettle of Shaun Maloney’s new Hibs until next season, but in the interim, Edinburgh’s green and white have the current campaign to complete, and will look to do well in their remaining league matches, qualify for Europe and, hopefully, make history again this May by winning the Scottish Cup. Season 2021/22 has been a topsy turvy campaign for Hibernian both on and off the pitch—a famous cup-win at Hampden in May would suddenly make all of the turmoil make perfect sense.