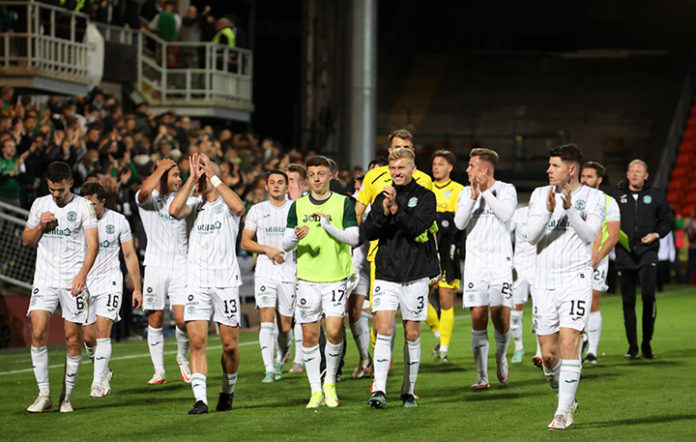 HIBERNIAN have continued their excellent start to the campaign and currently sit third in the Scottish Premiership and are also in the League Cup semi-finals.

Jack Ross’s men have lost just one domestic match out of ten played and are well organised, fit and sharp—if a little threadbare up front.

At the start of this month, the Hibees travelled to Ibrox to play league-leaders, Rangers. The Leith side have been largely dreadful against the Light Blues since the Stubbs/Lennon era, suffering several insipid performances and even taking a couple of good hidings in the fixture under Heckingbottom and Jack Ross—although his sides have played better in recent matches against the Gers.

This time at Ibrox, Ross got his team lineup and initial tactics spot-on. Hibs were the better side for the match’s first half hour and looked capable of winning the encounter. They even led 1-0 after Kevin Nisbet’s superb header in the ninth minute. However, a harsh red-card given to Ryan Porteous after 30 minutes changed the match entirely. Referee Nick Walsh gave the defender a straight red for a sliding tackle on Joe Aribo and the Hibees had to reshuffle the pack to compensate for being a man down. As a result, Hibernian’s attacking threat was restricted and it became only a matter of time before the side with the extra-man took full advantage.

Hibs—who were wearing their new Sunshine on Leith yellow kit—held on until the 50th minute, when Roofe levelled the match. Alfredo Morelos delivered the coup de grâce with 12 minutes remaining and Hibs lost 2-1. However, Ross’ men did almost everything right in this match and were unfortunate to lose—this bodes well for the sides’ upcoming League Cup meeting at Hampden. Hibs were also denied a stonewall penalty for a Rangers handball in the box in the second-half. With no away fans allowed at the match there was nobody to shout for it, though, and the referee, predictably, waved claims away.

A week earlier, Hibernian had beaten St Johnstone 1-0 at Easter Road, thanks to a Martin Boyle penalty. That was only Hibs’ third win at home to the Saintees in a decade. That win followed a 2-2 draw at home to St Mirren. Hibs blew a golden opportunity to go clear at the top of the table in that game, leading 2-1 with two minutes remaining. A superb Paul McGinn volley and a Boyle penalty had cancelled out Eamon Brophy’s opener for the Buddies, but Joe Shaughnessy equalised for the visitors right at the death.

One week before that, the season’s first Edinburgh Derby was played at Tynecastle. While it was a 0-0 draw, it was far from being a dull encounter, with both teams’ goalkeepers performing heroics—especially Matt Macey between the Hibernian sticks, who looks to be a superb acquisition.

Before the international break, the Hibees had easily beaten Livingston at Easter Road in the league. Davie Martindale’s side offered stubborn physical resistance yet little in the way of a goal-threat and Ross’ men ran out comfortable 2-0 winners, Boyle and Nisbet both scoring in the second-half.

Meanwhile, in the League Cup at Tannadice, Hibernian blew away Dundee United. The Green Jerseys had the tie won by half time, leading 3-0 thanks to goals from Joe Newell, Martin Boyle and Scott Allan. The tie ended 3-1 to Hibs and set up a semi-final with Rangers on Sunday November 21. The other semi-final will be contested by Celtic and St Johnstone, the day before.

The last time that Hibs faced an Ibrox side at that stage of the competition was in 2004, when what was essentially a Hibs youth-side beat the Gers on penalties. The Hibees have played four other League Cup semi-finals against Rangers over the years. In 1985/86, Hibs won a two-legged affair 2-1 on aggregate, only to then lose the final to Aberdeen. However, in 1991 and 1972 Hibs defeated Rangers in the semis and went on to lift the trophy. Rangers did win one League Cup semi-final against Hibs, back in the trophy’s inaugural season 1946/47. So, history would Hibs’ side with this latest semi-final looming. Once again, the green legions are Hampden bound and have a chance not only of reaching the final but of helping to erase the memory of Hibernian’s embarrassments at Mount Florida last season.

Hibs Women recently smashed the record for the attendance at a Scottish women’s club football match. 5512 fans at Easter Road saw an easy 3-0 win over Hearts in the SPWL. Alexa Coyle, Rachel Boyle and Eilidh Adams were on target for the Green Jerseys in a memorable victory. It seems, as always, the Hibs go marching on…