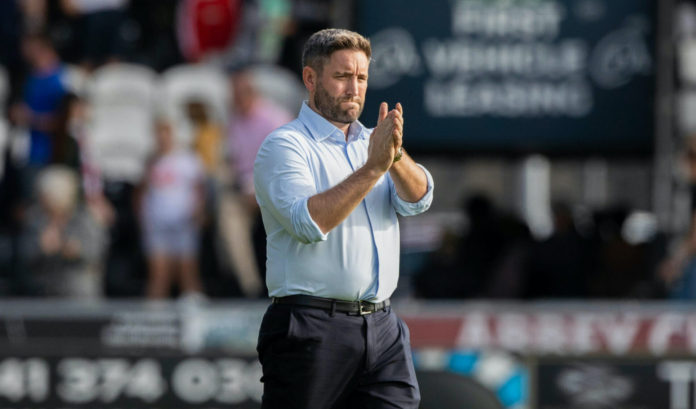 LEE Johnson’s reign as Hibernian manager has gotten off to a topsy-turvy start. History shows us that—by and large—topsy-turvy is what Hibs do best and this season already looks like it could be a very interesting one for Edinburgh’s green jerseys.

The early, ignominious humiliating exit from the League Cup was completely unacceptable to the Hibs faithful. That failure was further compounded by backroom folly as bungling staff at Easter Road forgot that defender, Rocky Bushiri, was suspended for the club’s home League Cup tie against Morton. The big stopper played regardless, though it made no difference as the Cabbage drew that match then lost to the Ton on penalties, then the match was later declared forfeit, with Morton being awarded a 3-0 victory retrospectively, after Hibs’ transgression was discovered. Hibs were out of the League Cup anyway, regardless of that outcome. Hibs usually reach at least the quarter-finals of this tournament!

In the league, the Hibees have played six matches, winning two, drawing two and losing two. The team has neutral goal difference and currently sits 8th in the Scottish Premiership table, with eight points.

Late, late goals have earned the Hibees five of those eight points. The season opener at McDiarmid Park brought a 1-0 win over ten-man St Johnstone, Josh Campbell scoring the winner in the last minute.

One week later, prodigal son, Martin Boyle, made a surprise return to Edinburgh and saved Hibs’ blushes against Hearts at Easter Road, in the season’s first Capital Derby. The Socceroo bagged a 94th minute equaliser in the 1-1 draw, cancelling out Lawrence Shankland’s first-half opener for the Jambos. The recapture of Boyle was a good piece of business and gave the fans a real lift. Hibs had lacked creativity and energy up front in his absence.

It was another ‘Lothian Derby’ for the Hibees a week later, as they travelled to West Lothian to take on David Martindale’s plucky Livingston side. That match was indeed a game of two halves—the home side bossed the first half and led 1-0 at the interval, but the green jerseys had the best of the second, Nohan Kenneh hauling the Hibees level after 51 minutes. Ayo Oblieye bagged a late, late winner for the Lions, though, somewhat against the run of play. Almondvale hasn’t been much of a happy hunting ground for Hibs in recent times.

Next up for Johnson and his side came a home match against Rangers, on August 20. The Govan side’s obligatory penalty kick by James Tavernier had the Hibees 1-0 down at half-time, but that man Boyle drew Hibs level six minutes after the re-start. Hibernian’s joy seemed short lived, though, as the in-form Tom Lawrence put the away side 2-1 up just seven minutes later. Red cards followed for Rangers men Lundstram and Morelos—both for nasty fouls—and Hibs found themselves up against nine men for the last 15 minutes. Josh Campbell scored in injury-time to rescue a point for Hibs, the 2-2 draw probably being a fair result in the end. The last 27 league matches against Celtic and Rangers have brought Hibs no victories —that needs to change.

Keanu Baccus’ early goal proved to be decisive a week later, as Hibs lost 1-0 to in-form St Mirren in Paisley. Johnson was disappointed in his side’s performance, though the Hibees did have a lot of the ball in this match. Amends were made a week later as the Hibees beat ten-man Kilmarnock 1-0 at Easter Road, Joe Newell being on target early in the first-half.

Of Hibernian’s recent recruits—aside from Boyle— Elie Youan and Harry McKirdy seem to be the exciting players to keep an eye on in this new look Hibernian team. It’s too early to judge Johnson as Hibs gaffer, only time will tell. The last few managerial appointments at Easter Road haven’t worked out—Heckingbottom was dire, Ross brought too many high-profile disasters and boring football, while the less said about Maloney’s tenure, the better. If Johnson can get Hibs playing good, effective attacking football, such as that craved by the club’s fans, a solid, exciting campaign will be the reward. If it’s to be ‘more of the same,’ it’s going to be a long, long season—campaigns are not won by equalisers.