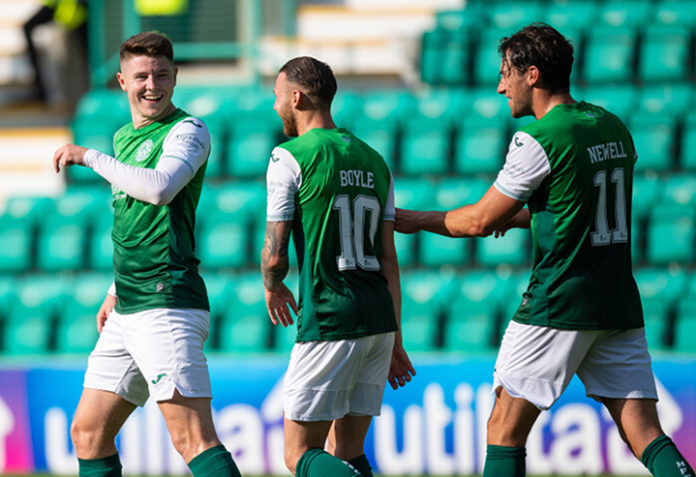 OVER the years, Hibernian have given their fans countless memorable moments of joy, yet relatively few such episodes will have come from pre-season friendlies.

In my 35 years of attending Easter Road we’ve enjoyed some wonderful pre-season clashes with top English sides ; the 4-1 thrashing of Chelsea in 1986 and the 2-2 draw against them in 1991. The 3-0 rout of Blackburn Rovers and Alan Shearer in 1992, the thriller against Sheffield Wednesday in 1994, the 1-0 win over Stoke in 1995 and even the 2-2 draw against an Everton team with Wayne Rooney in it back in 2002—all were memorable matches yet also pegged to the realism that they were ‘only friendlies’ against teams whose pre-season preparation was at least a fortnight behind ours.

The recent friendly against Arsenal at Easter Road, however, will remain seared into the minds of the 2000 Hibbies who were allowed to attend; but not because of the result.  Hibs fans will remember something special, something deeper about that particular friendly.

When Martin Boyle captialised on a sluggish defensive catastrophe by Arsenal to put Hibernian 1-0 up in the first half, 2000 Hibs fans roared in unison as the ball hit the back of the net. Their cheers reverberated around Easter Road. It was a sound that no Hibs fan had heard since early 2019—the sound of joyous Hibbies cheering a goal in unison. When that goal went in, one could feel a sort of relief in the air among the Hibernian faithful. Relief, not at taking the lead against a strong but obviously unfit Arsenal side, but at being back in familiar surroundings among our fellows again to watch our heroes in green—a simple pleasure denied us as football fans for far too long.  No Hibs fan or indeed fan of any other club will ever take that simple pleasure for granted again. All Hibs fans will agree that it’s good to be home.

The Arsenal game ended 2-1 to Hibs, new boy Daniel Mackay grabbing the Cabbage’s second midway through the second-half. Emile Smith-Rowe did score a late consolation for the Gunners, while Kevin Dabrowski saved brilliantly a penalty kick by Arsenal’s Nicolas Pépé to ensure the win.

The Green Jerseys’ first competitive outing of the new campaign came against Andorran minnows FC Santa Coloma at Easter Road in the new Europa Conference League. This time, more than 4600 fans were allowed in and they had plenty to shout about. Most of that shouting was aimed at useless referee Vilhjálmur Thórarinsson, who not only sent Joe Newell off for no apparent reason after 30 minutes, but who also allowed the visitors to kick and foul with impunity for the whole first half.  The inept official even chopped off a good Hibs goal and denied the Leith side an obvious penalty. Eventually, though, even Mr Thorarinsson had enough of Santa Coloma’s diabolical ‘tactics’ and red-carded two of their players in the second-half. Of course, all of this doesn’t detract from ten-man Hibernian’s excellent 3-0 win in this home leg. Boyle hit two goals and Kevin Nisbet also got on the scoresheet—much is expected of those two players in the coming campaign.

As it turned out, Hibs didn’t need 11 men to beat Santa Coloma—a side who offer absolutely nothing to the tournament, with many Hibs fans likening their style of play to that of the bloodthirsty Airdrieonians sides of the mid 1990s. The second leg, a mere formality played out among the Pyrenees Mountains, was won easily 2-1 by the Hibees, far more easily than the narrow margin of victory suggests. Jamie Murphy and Mackay were on target as the Hibees cruised into the next round, where they will face a much sterner test in the form of Croatian side HNK Rijeka.

The new league campaign for Jack Ross and his side began at Fir Park, where amid glorious sunshine the Hibees overcame the Steelmen 3-2, twice coming from behind to do so. ‘Well seemed more up for the physical battle and were more direct in their style, but the green jerseys played the better passing game and showed better determination to come out on top. Kevin Van Veen and Bevis Mugabe were on target for Motherwell, while Hibernian’s goals came from Kyle MacGennis, Chris Doidge and a Boyle penalty.

Jack Ross’ men now face that Europa conference double-header, a home league match against Ross County and a home League Cup tie against Kilmarnock in the coming weeks. That Hibernian rollercoaster is once again moving along, the team looks fit and hungry and will doubtless be eager to make amends for last season’s three Hampden catastrophes while also continuing the previous campaign’s good league form.

Everybody at The Irish Voice was saddened to hear of the recent death of journalist, writer and Hibs fan, Jim Hossack, who famously narrated the iconic 1991 Hibernian SKOL Cup celebration VHS The team that wouldn’t die.