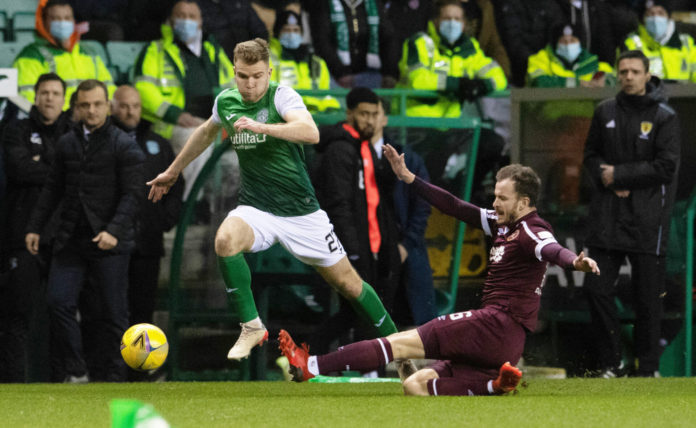 THE year 2022 hasn’t started well for Shaun Maloney and his Hibernian side. The green jerseys have played eight matches since the extended winter-break, and have only beaten Arbroath in the Scottish Cup in that time in 90 minutes.

Prior to that, Hibernian’s only victory this year to date was a 1-0 win after extra-time in a frustrating, mind-numbing encounter with Cove Rangers at Easter Road in the Scottish Cup, back on January 20 to set up that last 16 tie away to Dick Campbell’s in-form Arbroath side. Hibs hadn’t played a competitive match up at Gayfield in 45 years. The last time was in 1977’s Scottish Cup, when Eddie Turnbull’s men were held to a 1-1 draw and then lost 2-1 to Arbroath in the replay at Easter Road. There was no such problems this time around though as goals from Demetri Mitchell, Kevin Nisbet and Chris Mueller cancelled out an early opener from Arbroath’s Craig Wighton and saw Hibs win 3-1.

Maloney won his first two matches as Hibs boss, beating Dundee United and Aberdeen, but he had to wait more than three weeks for the next test, a midweek trip to take on his old club, Celtic, in Glasgow. The Hibees might have had the lead in this match, but for a poor miss by Nisbet, who now seems a pale imitation of the goal-machine from last season. The striker possesses that kind of natural finishing ability which simply can’t be taught, however, the player of late also seems a stone too heavy and a yard too slow at times and is also not suited to the lone striker role. Hibs fans will hope that this tremendously talented young man can regain his mojo soon.

Hibs lost the match at Celtic Park 2-0, despite dominating possession. It wasn’t a drubbing by any means yet the Hibees were never going to win this one. As with the League Cup Final back in December, the difference was Celtic’s legion of foreign stars—Hibs simply can’t compete on that level, and there is no shame in that.

The next league match was a midweek trip to Fir Park to take on Motherwell. The Steelmen played the last 14 minutes of the match with ten men, following Liam Donnelly’s red-card, but that made no difference to the match’s
outcome. It ended 0-0 with impotent Hibs failing to register a goal attempt on target.

Next up, Scotland’s ‘Crazy Gang’ club, Livingston, visited Easter Road, for what was the green jerseys’ first home match on a Saturday since early December. New boy Mitchell gave Hibs an early lead and Chris Cadden also scored, but the Leith side were to be the losers in a five-goal thriller, Davie Martindale’s men winning the match 3-2. Hibernian’s midfield seemed lightweight at times in this encounter. It says a lot that on the day, Hibs’ midfield was bossed about by ex-Hibee mediocrity Stephen Omeonga.

A full house at Easter Road on Tuesday, February 1, saw Maloney’s first taste of managing in a major derby fixture against Hearts. The match itself was a bit of an anti-climax after all its hype—not uncommon with this fixture. The Hibees competed well and were on top in the early stages, yet they were also fortunate to escape with a 0-0 draw, stand-in keeper Kevin Dabrowski making several key saves to deny the Jambos.

The Hibees were seventh in the league table when Maloney took over. They ended 2021 in fifth place and remain so, yet points dropped in recent weeks could be the difference between Hibs having or not having European football next season.

Hibernian’s new management team is evidently keen to play continental style football; playing the ball out from the back and retaining possession. The notion is admirable, but for it to work in Scotland a team needs the right players. Hopefully, new additions Mueller, Rocky Bushiri, Ewan Henderson. Sylvester Jasper, Elias Melkerson and Runar Hauge are just the sort of players to ease the transition to this new style of play.

Prior to the Arbroath game, Hibernian and Maloney travelled to Ibrox on league business, losing out 2-0 thanks to an early penalty from James Tavernier and a second-half goal from Alfredo Morelos. The Hibees haven’t beaten Rangers in the league for almost four long years and 15 matches, which is a real fly in the ointment for most Hibs fans and a run which the new gaffer will surely have to end in the near future if wants his Hibs side to be taken seriously and challenge at the top end of the table once again.