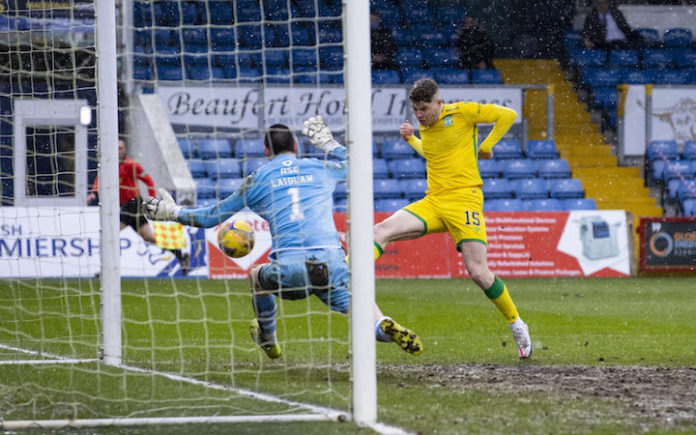 MARCH saw Jack Ross’s Hibernian side play just three matches, all of them away from home and all three games producing very different outcomes for the green jerseys. Yet the Hibees remain very much ‘the best of the rest’ outwith the top two in Scotland’s top flight—a state of affairs that should please most Hibernian supporters.

Though the three most recent matches have been away, it’s worth noting that current Covid-19 restrictions have rendered ‘home advantage’ completely redundant at all levels of football. Please, commentators, please desist from considering match venue as a valid reason for any team’s successes or shortcomings at the present time. For now teams might as well be playing at Oriam or Carrick Knowe.

The Hibees fell foul of the League Cup holders on March 6 at McDiarmid Park, losing out 1-0 to St Johnstone. The Saintees’ goal was a marvellous strike from ex-Hibee Liam Craig. At times, in this match, the Hibs players looked a tad disinterested or perhaps jaded, yet when they applied themselves they were able to cause the Perthshire side’s defence some problems, albeit without sticking the ball into the net.

Next up came a visit to Dingwall to take on former Hibee John Hughes’ Ross County. The Staggies employed a highly effective but eye-bleedingly awful to watch offside-trap game and even took the lead early in the second-half with a Billy McKay strike. However, amid a horrid rain shower, the men from Leith fought back and earned a deserved 2-1 win.  Martin Boyle levelled from the penalty spot to grab what was his sixth goal in seven matches, with Kevin Nisbet’s 14th goal of the season completing the victory and sending the three points back down the road to Edinburgh. Staggies boss Hughes was fuming about Boyle, accusing the tricky winger of diving and asserting that the last time he had seen such a dive the diver had been wearing swimming trunks.

This season thus far Hibs and Livingston had inflicted ignominious three-goal margin home defeats on each other. The sides’ third league meeting of the season at Almondvale produced a 1-1 draw. Craig Sibbald scored for Davie Martindale’s men, while Christian Doidge equalised for the Hibees. Jack Ross was pleased with the result and perhaps had reason to be, given the West Lothian side’s fine form this season, but the green jerseys should have won this match, as they dominated the second half in terms of chances.

So, a win, a draw and a loss in March. Stereotypical Hibs league form, isn’t it? Yet things look great for Hibernian at the moment. The Hibees remain third in the table as the league’s rather pointless split comes into effect. Hibs have a seven-point advantage over fourth placed Aberdeen with just 15 more points to play for. European football has been all but secured for the Hibees and a third place finish now seems a likely outcome. Ross’ men have but to keep their nerve and Hibs fans will get a European adventure in the late summer.

The prospect of European football doubtless has many Hibs supporters champing at the bit to see their heroes play in person once again even more. Everyone misses the Easter Road roar and rumble, the banter in the stands, meeting up with football comrades and seeing our heroes and their goals for real, live. That time is edging closer. At Easter time it’s perhaps cheesy or clichéd to draw resurrection or rebirth parallels with the beautiful game, and yet, God, science and fate willing:

The darkest hour comes just before the dawn, but with luck, faith and perseverance, we’ll all soon be back at the beautiful Leith stadium, again.

This column would like to extend its heartiest warm wishes for a Happy Easter to all readers of The Irish Voice, all Hibs fans and to everybody at Brora Rangers FC.