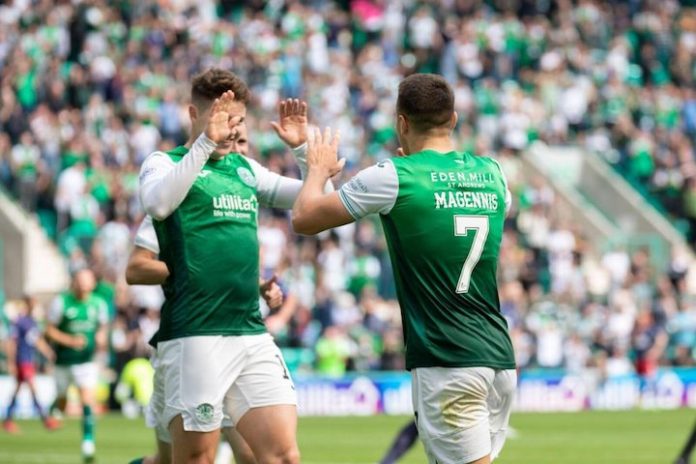 AN EARLY exit from European competition hasn’t dampened the domestic footballing ardour of Jack Ross and his Hibernian side. The Hibees sit atop the Scottish Premiership table on goal-difference and are playing decent football.

August 28 saw a return to unrestricted capacity at Easter Road and a 2-0 victory for the Hibees over a well-organised, yet largely impotent, Livingston side. Kevin Nisbet and Martin Boyle got the goals in that match, the result of which more than made up for the Cabbage’s dropping of two points at Dens Park the previous week.

There hasn’t been a 0-0 draw between Dundee and Hibernian since September 1992—that’s 43 matches. The fixture often oozes goals and this latest contest was no different. Sadly for the Hibees, their two goals—scored by Boyle and Ryan Porteous—were sandwiched between two goals scored by the home side.  Jason Cummings—who else—gave the Dees a first-half lead, while their equaliser came from substitute Paul McGowan.  Hibs were without Nisbet and the injured Christian Doidge for this encounter, so new signing Jim Scott was given his debut up front. Hibernian have actually had four players of that name over the years and the newest incarnation will doubtless hope to emulate the great Jim Scott of the 1950s and 60s sides.

Plenty of chances were missed by Hibs at Dens Park, while Matt Macey made some terrific saves to thwart Dundee. The green jerseys were lucky to hold on against the home side’s late Paul McGowan inspired rally, but on balance a draw was a fair result on the day. It was refreshing to see two sides have a real go at each other in such a manner, as often occurs in this fixture.

Hibs’ euro-adventure came to an end against HNK Rijeka of Croatia. The Hibees managed a 1-1 draw in the home-leg—Boyle scoring—and went to the Balkans with an even chance of progressing to the next round with the away goals rule having been abolished by UEFA. The second-leg began badly for Jack Ross’s men, who went a goal behind in the first half, but the green jerseys showed great character to rally and to level the tie on the night and on aggregate, thanks to a Kyle Magennis goal. The Hibees looked like they might progress, however, a red-card for Darren McGregor and subsequent late collapse saw Hibs lose 4-1 on the night and 5-2 on aggregate. There was no disgrace in this defeat. Rijeka are a decent side and without the sending-off Hibs may well still have been in Europe.

Magennis, Boyle and Doidge were on target at Easter Road in early August against Ross County in the league, as Hibernian cruised to a 3-0 victory.

Hibs may be out of Europe, but they are still very much in the League Cup. Round two saw Championship Kilmarnock visit Easter Road with the Hibees brushing aside Tommy Wright’s men 2-0 to reach the quarter-finals. Magennis and Nisbet (above) with those goals. Jack Ross’s men will face Dundee Utd at Tannadice in the next round.

So, the fans are back and the green jerseys top the Scottish Premiership and are in the League Cup quarter-finals; the team is playing well—what could possibly go wrong?

It is clear to most fans that Hibernian’s squad, though talented, is somewhat threadbare. The consensus among the fans seems to be that a striker and a central defender are needed. The need for the former is certainly more pressing after Doidge’s injury. Perhaps the new version of Jim Scott will be the answer. If Ross is able to add two or three new faces, one can see this Hibs side really going places this season—anything would be possible. It would be a shame if this Hibs side were to start brightly only to fade as injuries and suspensions begin to bite later in the campaign, as has often happened in the past.

Magennis already looks to be a superb signing. His box-to-box style reminds fans of 1990s superstar Pat McGinlay. Jake Doyle Hayes is a wonderful acquisition for Hibernian and will shine for the Hibees, hopefully showing just why guys like Roy Keane rated him so highly. Jamie Murphy, too, has looked excellent in recent matches. Hibs have an excellent squad. With further astute recruitment, this Hibs team will pick up silverware this season.

So, what’s next for Edinburgh’s green and white? Well, that’s simple, a top of the table clash against Hearts at Tynecastle, after the international break—the clubs’ first meeting since last year’s Hampden fiasco. Will Ross and his players be able to triumph in this season’s first real test?