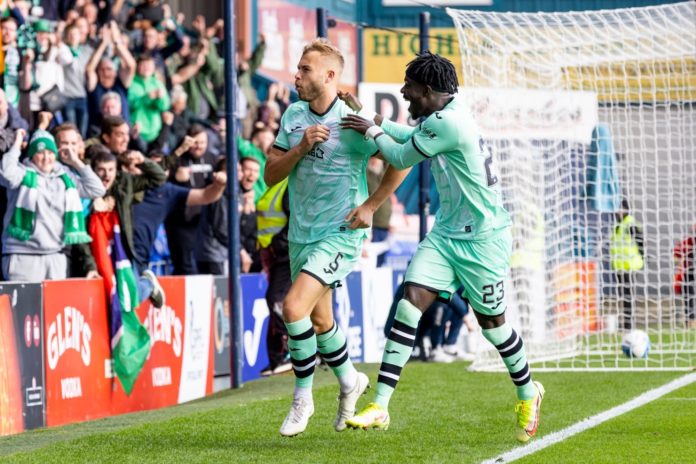 OCTOBER has begun with Hibernian as kings of Scotland’s capital, as the green jerseys sit in fourth place in Scotland’s top flight, while city neighbours Hearts are two league places beneath them.

Hibs sides down the decades haven’t exactly been famous for showing incremental improvement over a campaign. Usually for Hibs fans it’s a feast or a famine—dazzling good form followed by dire slip-ups. That pattern usually transcends squads, managers and squads of players.

Lee Johnson, in his eight league matches in charge of the Easter Road side thus far, has brought something very different. It’s not the panache and dazzle of the McLeish era Hibs side, nor is it the steely determination of the Lennon era. Likewise, this is no Mowbray freeflowing XI nor a Collins total-football side. What Hibs have now is simple, yet effective. Hibernian have a decent, able squad of attacking players who work hard for each other and for their manager—and the fans love it.

Eight league games have been played, four have been won, two drawn. That’s form that, should it continue, will see the Hibees qualify for Europe again at the end of this season.

Before the international break, Lee Johnson’s men destroyed Aberdeen 3-1 at Easter Road. Luis Lopez actually gave the Dons an early lead, but the home side were level by the interval, courtesy of a Martin Boyle penalty. The Dons finished the first half with ten men, after Scales was red-carded.

The Hibees battered the Dons’ goal for much of the second period and were rewarded with two more goals, the in-form Josh Campbell bagging a second-half brace. In truth, Hibs controlled this match even when the visitors still had 11 players. Aberdeen boss, Jim Goodwin, compounded the Don’s misery after the match, by embarrassing his own fans with after match accusations and rambling about Hibs players.

After the international break, Hibs travelled up to Dingwall to take on Ross County. The Cabbage bulldozed the largely impotent Staggies in the second -half of the match. Ryan Porteous (above) scored just after the interval and then the ever impressive Martin Boyle sealed a 2-0 win with a strike ten minutes from full-time. Porteous, who played superbly, could have had a hat-trick, coming close with two long-range efforts in the first half. It was a solid away win for Edinburgh’s green and white, whose manager and fans must now feel that their league position is a true reflection of steady progress. If the Hibees can play like this all season, there’ll surely be something for all to smile about come May.

What a week it was for Porteous. The 23-year-old not only starred and scored in his club side’s league victory, he also made his full Scotland debut in the midweek draw against the Ukraine and never put a foot wrong. He is often targeted by elements of the press, fans of other clubs and by certain ex-players turned pundits who really should know better. It’s time that they got off this young man’s back. ‘Ryan Porteous Bad’ stories get people online ‘clicks,’ which is fair enough. As one journalist who doesn’t get made to write such ‘clickbait,’ I say concentrate on the lad’s superb footballing ability and his potential to become a real Scotland great. He is a young lad who will mature with age. He’s from a normal working-class background —the same can’t be said of many Scottish players at our top clubs—that shouldn’t make him ‘fair game’ for elements of our media.

Hibernian’s Porteous is an asset to his club, to his country and to Scottish football. Hibs fans should enjoy his displays while they can—such magnificent performances will surely see bigger clubs come calling.