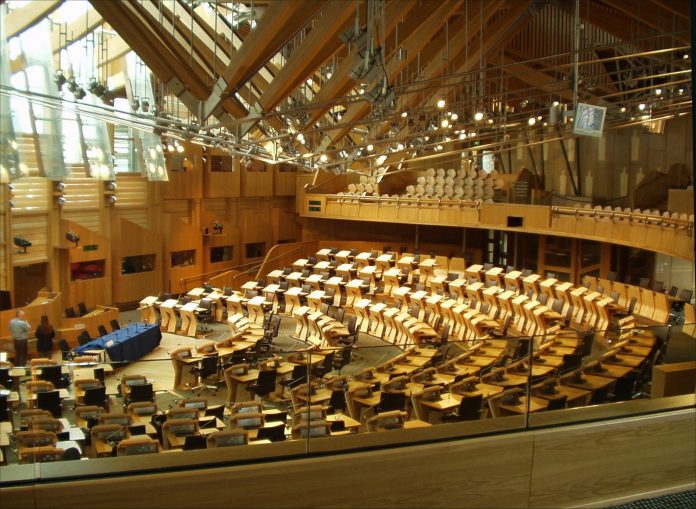 A vote will take place in the Scottish Parliament this Thursday which could bring the Offensive Behaviour at Football Act one step closer to finally being repealed.

The Irish community has played its part in the campaign to remove the legislation, with many Irish in Scotland recognising the law’s targeting of Irish political expression in certain situations.

Now, however, MSPs will have the opportunity to vote on the Stage 1 report and proceed to a subsequent vote to repeal the legislation, and with a majority of MSPs in favour of repeal it is hoped that the Offensive Behaviour at Football Act could soon be history.

Fans Against Criminalisation have been one of the most prominent voices to have spoken out against the act, and spoke to The Irish Voice about their hopes for the coming days as their campaign appears to be entering its final stage.

“Thursday is an important milestone in the almost seven year long campaign to repeal this much-reviled legislation,” FAC said. “With a two vote majority of those in favour of repeal we expect Parliament to vote in favour of the Stage 1 report and allow it to proceed to the next (amendment) stage. We do not expect that to take very long, so we are very close to the final stage which will involve another vote in Parliament to repeal the Offensive Behaviour Act.

“This would be the culmination of a very long struggle to give football fans back the same rights as other citizens and would end the unjust criminalisation of young, working-class people.”

With expert witnesses providing evidence in favour of the repeal of the act the Justice Committee were able to move on to this stage of the process, and among those voices was Danny Boyle, Parliamentary and Policy Officer for BEMIS, who also spoke to the The Irish Voice about the scrutiny his organisation will continue to apply to the repeal process, as well as their intention to provide evidence and insight if required.

Speaking with specific reference to the place of the Irish community in the consideration of the act, Mr Boyle said, “It was a monumental error not to engage the Irish community formally at the initial 2011/12 committee stage despite various efforts to do so.

“The Irish community were the victims of the apparent bullet and bomb campaign that preceded the act but were never formally spoken too at any time in the process. This remains an astonishing anomaly in policy and legislative development and has by and large continued throughout the acts implementation and assessment.

“Catholics and people of Irish descent are most likely to be victims of crimes under the provisions of the Act but also largely support its repeal. This should be ringing alarm bells for politicians and policy makers as evidence of a significant legislative error. BEMIS will continue to take an evidenced, human rights based approach to considering the act in conjunction with community groups from the Irish community we have engaged over the years on this matter.

“We look forward to the parliamentary debate and following committee stages and will continue to share our analysis at each relevant staging post.”

The MSP behind the campaign for repeal within Holyrood, James Kelly, also said he hopes that the apparent desire among parliamentarians to remove the legislation will not only ensure its repeal, but also send a message to the government about future policy.

“Instead of working with fans and investing in projects that actually change views, they have cut money from vital charities and services while at the same time doggedly pursuing the Football Act at every turn,” Mr Kelly said.

“The Football Act has horrendously backfired because it is entirely the wrong approach. Fans have lost all trust in the police and attention has been diverted away from methods which actually tackle sectarianism, like through education.

“Thursday’s vote might just be the prompt the SNP to realise the Football Act has to go – and to re-invest in funding for anti-sectarian projects.”