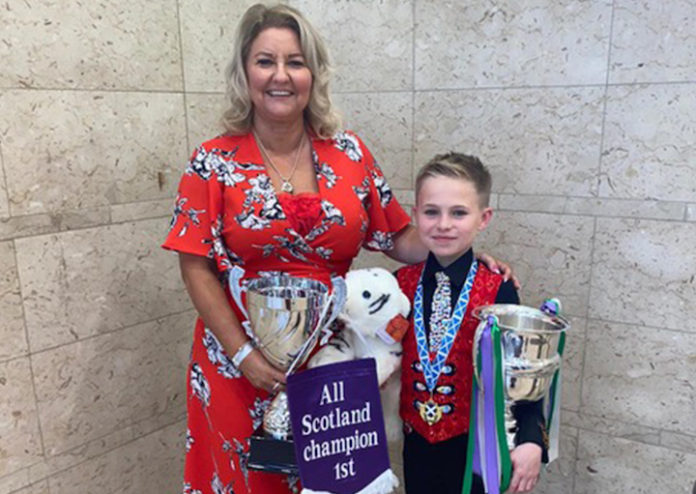 THE All-Scotland Irish Dancing Championships returned to Glasgow Royal Concert Hall for the first time since 2019 recently and students from Scottish schools were among some of the top performers yet again.

First up, there were four podium places for the Sharon Taylor Irish Dance Academy, namely: Oscar Donnelly (above), who won the Under 10 Boys Championship; Declan McLaughlin who finished second in the Senior Men’s competition; as well as fourth places finishes for Carly Robson and Matthew Hughes in the Under 6 Mixed Championship and the Under 15 Boys Championship respectively.

“It was a great weekend for the class again with four podium placers,” Sharon said. “There were lots more great performances from those who competed with personal bests achieved. We’re very proud of all of the dancers.

“We had a few kids who missed out due to a sickness bug, which was so difficult for them after waiting so long to take part in a major championships, but they will be back stronger for the next one. The venue is amazing and to see the dancers back on the spectacular stage in the Royal Concert Hall made the last two years worth it.”

There were two podium places for students of the McLaughlin School of Irish Dancing too, with Zara Gibb finishing second in the Under 8 Mixed Championship and her classmate Shannon Dyer finishing just behind her in third place.

“Our Under 8s shone so brightly and we were so proud to have two podium places courtesy of Zara Gibb and Shannon Dyer,” teacher Eileen McLaughlin said. “They were the two top girls in a fabulous competition. The work ethic and commitment of all of our younger dancers in particular is tremendous as is the support from their parents. We are very excited for the future with such huge talent in our class.

“We were also delighted to have the opportunity to get back to competitions and, of course, having the All-Scotland Championships on our doorstep is just a dream come true. After such a difficult 18 months for our dancers we were just so proud to see them on this fantastic stage again and the great results were really just an extra bonus.”

There was also a notable performance by Ethan Farrell from the Harrison School of Irish Dance, as he finished second in the Under 12 Boys Championship, which drew praise from his teacher Susan Harrison.

“Ethan’s fantastic second place in a world class competition is so exciting,” Susan said. “The whole school is beaming with pride to have him flourish in such a tough competition and his hard work, determination and class is a joy to watch.”