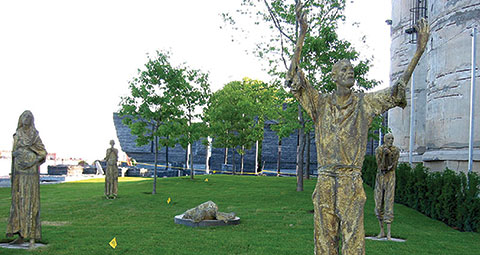 THE committee behind the community-backed memorial to those who died and were displaced by the Great Hunger are continuing their hard work to make the proposed memorial a reality, despite encountering several barriers to concluding the design process and confirming the final location of the memorial.
Coiste Cuimhneachain An Gorta Mór (Great Hunger Memorial Committee) have already raised the funds necessary to begin drawing submissions and selecting the final design of the the memorial—offering a substantial cash prize for the chosen entry in cooperation with the Glasgow School of Art—and with support coming from across the Irish community in Glasgow many had hoped that the initial speed of the project could be maintained.

However, following discussions with Glasgow City Council and communications with the Archdiocese of Glasgow in an effort to select a final location for the memorial the lack of confirmation over a site has led to the next step in the process stalling.

“We have yet to hear back after writing to arrange a meeting with the new leader of Glasgow City Council with a view to determining where this memorial will be situated,” a spokesperson for Coiste Cuimhneachain An Gorta Mór said. “So far the council are not giving any indication of where our memorial could be located, and with redevelopment work scheduled to take place along the Clydeside there is uncertainty about the possibility of using that location, or of a site being available at the conclusion of the redevelopment work.

“We have also opened up a conversation with the Archdiocese of Glasgow, with a site beside St Andrew’s Cathedral being examined as a possibility for our community memorial. However, with the uncertainty about the location of the memorial also affecting the process of working with the Glasgow School of Art, we have been unable to push forward our fundraising plans until we have more clarity about the form the memorial will take.

“With George Square also being considered as a possible site and support coming from St Mary’s Church in Abercrombie Street—where a site on the corner of the church grounds has been offered—the committee is continuing to work hard to bring this uncertainty to a close and finalise the proposed memorial. When we have achieved this we will relaunch our fundraising efforts and once again call for the support of the Irish community in Scotland, who have already raised so much money in order to help the committee come this far along the road to building a fitting memorial to those affected by the Great Hunger.”

The preferred site for the committee remains a location somewhere along the River Clyde, but with major redevelopment set to take place along the city centre portion of the river it is possible that it will be unavailable until work concludes in 2020, and it is still unknown whether it will feature a suitable site for the future memorial.

While the difficulties associated with the community -backed memorial have seen it stall, in spite of the best efforts of those involved, the Irish community has seen the Glasgow City Council-led memorial—which drew criticism from many in the Irish community—select its final design and location, with the People’s Palace chosen for the construction of a pathway telling the story of the Great Hunger and allowing space for remembrance and reflection.

Led by Councillor Matt Kerr, who promised to overcome whatever obstacles emerged as Glasgow City Council sought to establish a Famine Memorial, the project nevertheless drew criticism for its joint commemoration of the potato blight in both Ireland and the Scottish Highlands—two catastrophes each with very different outcomes.

At the time it was launched, Coiste Cuimhneachain An Gorta Mór gave its reasons for commencing efforts for an alternative memorial, explaining to the city council in a letter: “Our concerns centre on the apparent revision of history, indeed, construction of a new narrative, which appears to be the basis of your proposals.

“Chief among them the following: That a stand-alone memorial to the victims (family, relatives and community members of the current Irish communities in Scotland), as per scores of cities and towns in North America (above), England, Wales, New Zealand and Australia, appears to be unable to be erected in Glasgow. This in a city that received approximately 100,000 starving desolate refugees that suffered further multiple deprivations on their arrival and for many years in Glasgow and its environs.

“That this memorial should be combined with another that seeks to commemorate suffering (no fatalities) as a result of the potato blight in Scotland —as per much of Europe—in the mid-1800s. This and other sufferings in Europe at the same time contains but a vague relationship to Ireland and the worst mass hunger (per head of population) affecting Europe for hundreds of years.

“That those who form the historic multi-generational Irish community in Glasgow and its environs in Lanarkshire and other areas of Scotland are not being viewed as the primary focus for consultation in this proposed development.”

Now Coiste Cuimhneachain An Gorta Mór are preparing to overcome the latest hurdle in their way as they seek to deliver a fitting memorial to the victims of the Great Hunger who fled in desperation to Glasgow and for those who perished as Ireland starved.