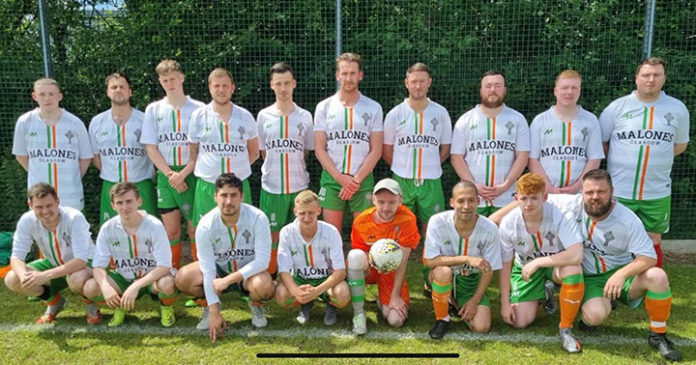 DESPITE not having played much football in the past 18 month, Glasgow Irish FC have recorded some impressive results as they stepped back onto the pitch for some competitive action.

Although they were beaten by Barrhead in their opening fixture of the Glasgow & District Sunday Football Championship (GDSFC) Friendly Trophy, the Irish bounced back with an impressive 3-1 over against Saracen Red Star at The Donald Dewar Glasgow Club.

The Irish have lost a large amount of the previous season’s squad, but they have also added some new faces, so these games have provided an opportunity for these players to show what they can bring to the team going forward.

The game itself was a stuffy affair in the opening stages with both teams struggling to get any real fluency in their play and only half chances on offer for Tony Garth and Jay Mathieson. The front two would be involved as the Irish took the lead, however, when Mathieson was fouled inside the box and Garth stepped up to fire home a superb penalty to make it 1-0.

This goal should have been the catalyst for Glasgow Irish to kick on, but instead Red Star started to get a foothold on the game and equalised from the spot after some lax defending.

The Irish returned after the interval with a renewed focus. The defence held strong on several occasions dealing well with any attacks. This solidity at the back allowed the Irish to take the lead again when man of the match Paul Ruby slotted home from a Jay McCann cross in what was a brilliantly worked goal.

Glasgow Irish were piling on the pressure, going close through Ruby, Chris Gillespie and Mark Paterson. The latter would eventually set up the impressive Darren Young as he cracked home a superb shot into the bottom left hand corner to put the game out of Red Star’s reach. 3-1.

Next up for the Irish was a match against Anchor Sociedad at Toryglen in the same competition. Previous meetings between the two clubs had seen them struggle against what has always been very well organised team, so they were well aware of the task that lay ahead.

The opening exchanges of the match brought very little in the way of good football as both sides tried to suss each other out. Anchor had a few half chances in the first 15 minutes, but Glasgow Irish’s defence managed to deal with any danger.

The Irish started to move up a gear and got the opener when Garth sent Mathieson clear and, despite seeing his first effort saved by the Sociedad keeper, he kept his cool to send the rebound into the net.

After this, the Irish raised their game and Mathieson, in particular, was causing problems with his pace and strong running. The young striker was at the heart of everything positive and as he raced clear an Anchor defender could only foul him on the edge of the box, which resulted in a red card for the opposing player and a free kick in a dangerous position for the Irish. From the set piece, Young sent in a superb cross that found man of the match Mathieson who sent a header into the bottom corner for his second goal of the game.

The Irish were in full control now and the third goal came when Jay McCann sent Deveney clear and he slotted it past the Anchor keeper. Young then sent a corner over for Garth and the skipper slammed a superb header past the keeper for the fourth. Paterson replaced McCann and made an immediate impact. Dylan Murray found the striker out wide and he cut inside and sent a strike into the top corner of the net to make it 5-0. Sociedad did pull a goal back from the penalty spot, but it was too late in the day for them.

The win marked another good performance from this young Irish side, who are still missing some key players.