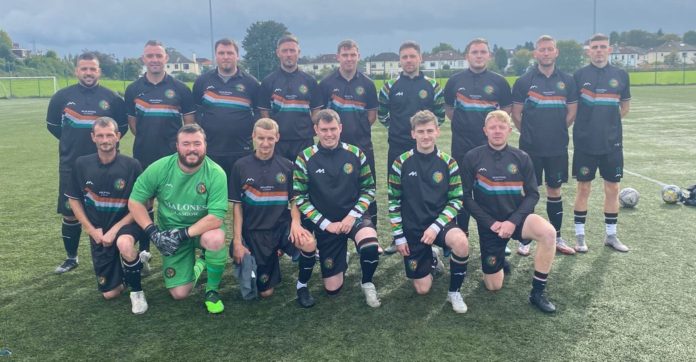 GLASGOW Irish FC enjoyed a successful month as they safely negotiated their passage to the next round of the Only Sport Sunday Trophy and picked up vital league points.

As August closed they saw their way past Glasgow Wellington Colts at Drumoyne, where despite a hard-fought match they did the necessary.

With three penalties awarded in the game the Irish edged in front to win 3-2, with goals from Chris Gillespie, Jay Mathieson and Juan Crlos Verdejo and a man-of-the-match performance from goalkeeper Sean Jones.

The victory set up a tie in the next round with FC Pather, but before that the Irish were on league duty against Flip The Mindset, and turned on the attacking flair with nine goals scored.

Swapping goals with Flip The Mindset until they held a lead of 5-4, they suddenly shut up shop and scored another four to notch the winning scoreline of 9-4.

Goals from Mathieson, Jay McCann, Matthew Cummins, Mark Paterson, Mark Leckenby and Tony Deveney—who chipped in with four—gave cause for confidence after a fine attacking display.

Preparing for a tough away trip to Barrhead Utd, the Irish enlisted the help of ex-Celtic player Bobby Petta at the next training session, with the Dutchman leading the session and passing on his experience from years as a professional.

At Barrhead, however, that all seemed to be forgotten as the Irish sunk to a 3-0 deficit going in at half-time. They second-half saw them rally and close the gap, with goals from Deveney, Chris Gillespie and Dylan Murray. Gaps at the back, however, meant that with two conceded there was to be no heroic comeback, and at the final whistle the scoreline read 5-3 in favour of the home side.

In their latest outing against Anchor Sociedad a two-sided affair saw the Irish edge out in front, first taking the lead through a Gillespie penalty and then doubling that advantage through Dylan Murray.

Though the Irish felt they were well in control of the match they endured a nervy period after switching off to let Anchor Sociedad back in the game with a well taken goal.

They took back the initiative, however, and Kev Barr forced a header from a corner kick goalwards to see it turned in by a defender, easing the tensions and securing three points with a 3-1 victory.

“It was a great result and keeps us in the top half of the table and with only five points separating the top six teams it’s all to play for this season,” Glasgow Irish said. “Next up for the Irish is Finnieston in league competition, and with fresh confidence we are hoping to get another three points and put Irish at the top end of the league table.”

On the east coast, meanwhile, Edinburgh Harps have enjoyed some good form in recent weeks, dispatching Mill AFC first with a comfortable 4-0 victory, before going up against their namesake Arbroath Harp in the Scottish Cup.
The second round tie was a close and hard fought affair, but in the end Edinburgh Harps did enough to run out 3-2 victors. With their name in the hat for the third round Harps are now eagerly awaiting news of who they will face as they march on in the competition.