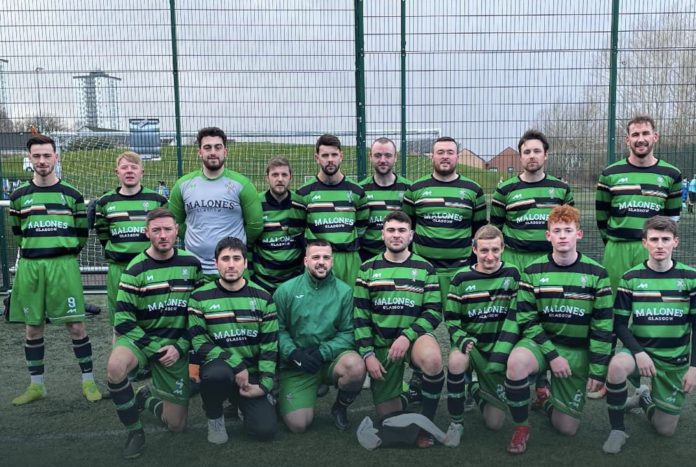 PRIOR to the Christmas break, Glasgow Irish FC defeated Fernhill United 5-2 to secure three points in the league and they were looking to take that form in 2022. The Irish did just that by beating Renfrew Rovers 2-1 in the Glasgow District League Cup in a hard-fought match. Captain Tony Garth netted both goals to continue a great season so far in front of goal.

Next up was a match against Glasgow Caley—a team fighting for top spot in the league—which would prove to be a very hard test for the lads. Struggling to get a grip of the game, the Irish went down 2-0 early on and worse was to come as Caley added to their total with a goal scored direct from a free kick. Things were to get worse for the Irish when a hard tackle on one of their players went unpunished too and a frustrated reaction saw them reduced to 10 men for foul and abusive language towards the referee. In the aftermath of that, Caley made it 4-0 before half-time. Despite giving it their all in the second-half, the Irish suffered a heavy 7-0 defeat.

Looking to put that disappointment, Glasgow Irish took on Dormy Forest who they were level on points in the league with, meaning it was a must win for both teams. The game was thrilling for the neutral. The Irish opened the scoring through Paul Ruby, but Dormy equalised almost immediately. In what was a physical game, with both teams showing hunger to get the three points, the Irish were looking dangerous and pushing hard for a second goal. However, it was Dormy—who had been reduced to 10 men—who struck to make it 2-1. Unbelievably, Dormy then made it 3-1 before half-time, leaving the Irish with a tough task. They quickly pulled it back to 3-2 before grabbing the equaliser 15 minutes before the end. Dormy weren’t finished though and made it 4-3 with only 10 minutes remaining. The Irish came roaring back though and on 87 minutes, Mark Paterson scored a fantastic header to level things up. Glasgow Irish had chances to win it but Dormy held on and it finished 4-4.

Still buzzing from the great fight showed in that match, Glasgow Diverse—a team in the league above the Irish—were up next in the Glasgow District League Cup. With only 13 available players due to injuries, Glasgow Irish played some great football nonetheless and took the lead through striker Jay Mathieson. Two minutes before half-time, however, Glasgow Diverse pounced to equalise and go in 1-1 at the break. Amid horrendous conditions, with the rain lashing down and no fresh legs to bring on, the second half saw Glasgow Diverse show their Premiership status prevail when, in the 65th minute Diverse made it 2-1 and then followed it with a third, which would prove to be too much for the threadbare Irish squad.

The Irish (above) were looking to turn fight and good football into results and they knew that a performance was needed against Pollokshields United who had beaten them 4-1 in the previous meeting in the campaign. Glasgow Irish were ready and up for the game and showed this as they came out the gates with high pressing and good football. Some good play down the wing saw a ball crossed in and a great header by in-form Irish striker Mathieson made it 1-0. Then, a great run by captain Garth resulted in a penalty, which he stepped up and buried the back of the net. Debutant Kieran Reilly scored a third for the Irish, while winger Tony Deveney added a fourth. Pollokshields scored one themselves to make it 4-1 at half-time.

The second half ebbed and flowed, with Pollokshields reducing the deficit further. However, the captain stepped up again for the Irish and slotted past the keeper to make it 5-2. A red card for the opponents meant that there was no way back for them and Glasgow Irish ran out 6-2 winners after man of the match Garth completed his hat-trick.
With a run of games coming up with teams round about the Irish in the table, they will feel that the next five games are vital to their season and will be looking to take maximum points and move up the table.

Edinburgh Harps, meanwhile, progressed to the next round of the cup against East Linton after winning 4-3 on penalties in the wake of a 3-3 draw. Unfortunately, on league duties, Harps were defeated 3-0 by Corrie Dynamo FC and they too, will be looking to get a string on wins together and rebuild momentum.