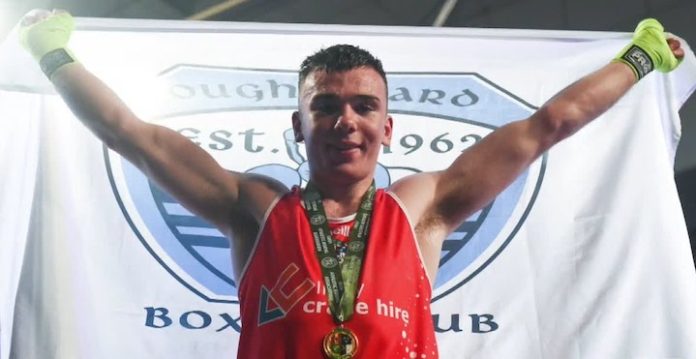 Lockdown put a stop to any big shows, meanwhile last year would see the return of the small hall shows when restrictions allowed, but nothing quite compares to a show at the Hydro in Glasgow when World Titles are at stake. That’s the case this weekend as Taylor defends his undisputed status with all four belts on the line against Englishman, Jack Catterall.

Three Irish fighters, at different stages of their career appear on the bill. Galway’s Kieran Molloy (above) makes his professional debut, while 36 year-old decorated amateur, Eric Donovan (14-1) has his 16th professional fight. Paddy Donovan, will have his eighth professional fight, having won all previous seven.

Eric Donovan, from Athy, Kildare, has fought in Glasgow before on a small hall show in Glasgow, when he put on the most stylish performance of the night. He faces a two-time Olympic Gold medallist, Cuba’s Robeisy Ramirez in what could well be a fight of the night candidate.

Limerick man, Paddy Donovan takes on Miroslav Serban (13-8). Donovan has stopped his opponent on five occasions, and Serban will have to be mindful of the Irishman’s left hand which has done the damage to all those he had stopped.

Kieran Molloy accumulated an amateur record of 83 wins and 19 losses, winning a few Irish National titles and representing Ireland in international bouts. Molly has signed a management deal with Conlan Boxing and a promotional deal with Top Rank Boxing. With the Conlan brothers directing his career he should be in good hands.

It will be good for all the boxers to appear on such a big show, Eric Donovan has appeared on a couple of bigger shows lately, although not to this level and finally seems to be getting the recognition his skill deserves. Paddy Donovan has been making a name as a knock out artist and will have the chance to perform in front of 13000 fans. As for Molloy, boxers usually have their first few fights on small hall events, so will be interesting to see how he handles the pressure of a big arena.