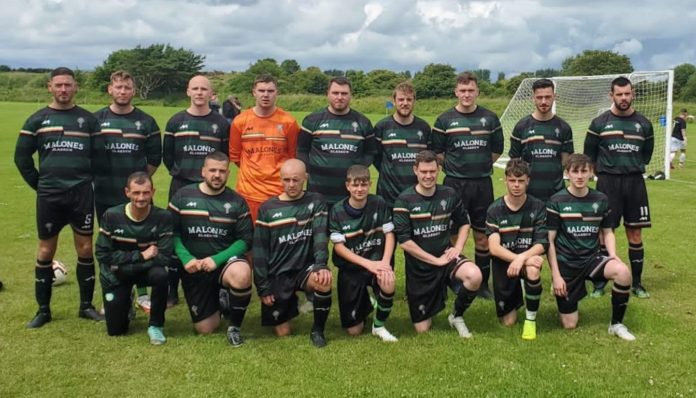 GLASGOW Irish FC started off the 2022/23 season in a friendly against Irvine CSC at the end of July—the two teams met up to raise money for a cancer charity.

With the Irish (above) having a good few weeks of pre-season training under their belts, friendlies every week would set them up nicely for the competitive season starting.

So the game was played in Irvine with both teams having quite a few new players to try out. Irvine CSC broke the deadlock and wasn’t long before they were a few goals ahead. The Irish stayed strong and battled to the end, but the Irvine CSC lads were too strong for the Irish on the day with an 7-2 victory. Goals for the Irish came from a Chris Gillespie penalty and a brilliantly worked goal from newcomer Declan Harvey. Man of the Match was awarded to Chris Gillespie and Declan a special mention.

Earlier in July, a game with Ashfield Star was cancelled so management took a decision to take on Maryhill Rangers—a new team joining the Glasgow District set up for season 2022/23.

The game started off really well with the Irish building more confidence as the game went on. The lads still had to be focused as Maryhill had a few chances themselves, hitting the bar and being awarded a penalty, which they converted. A lot of chances were missed, but it was a great showing so early in pre-season with the team creating lots of chances. Overall the Irish showed they were the better team on the day with a brace from winger Tony Deveney, a goal from Paul Ruby, and a hat- trick from captain Tony Garth, making the final score 6-1 and a great afternoon.

The next game was against Greenbank AFC, who will be Glasgow Irish opponents in the season in the 2022/23 championship. The previous meeting between the teams was in the West of Scotland Cup when green bank got a deserved 3-1 victory against the Irish.

This time, both teams were missing a few players from the regular squads, but still fielded strong teams, who both liked to play similar ways. It was a very two-sided game with both teams attacking with purpose and Greenbank taking the lead, but Mark Paterson cancelled it out with a great goal. It was still very end-to-end, but goals from Jay Mathieson, Deveney and Paterson again, saw the game out with a 4-3 win in what was a brilliant game to watch. A lot of positives can be taken from the day, but there is still a lot to work on. The ultimate positive was that the team was starting to gel and play football the way the manager wanted.

Changes and challenges
The management had a few decisions to make regarding the new season. Glasgow Irish has made Kev Barr the new captain with Chris Gillespie becoming the vice-captain for season 2022/23. The club would like to put on record its thanks to Tony Garth for his reign as captaincy as he showed great character to help the lads push for a successful season. Ultimately, the decision was a hard one, but it was taken it was to help Tony focus on his own game and hopefully benefit the team.

Next up was a game with another brand new team coming into the Glasgow District set up— Southside Albion AFC. They came up against a Glasgow Irish team full of confidence at Toryglen Football Centre. With some more new faces added to the team a good performance was needed against this new unknown team and the Irish lads set up well with the lads pushing with intent and finally got a well-deserved goal by Garth set up by Ruby. Glasgow Irish were creating chance after chance, but there was no end product and as the game went on Albion came into it and with the Irish stepping off the gas, it allowed them to have a few shots at goal, hitting the bar and working keeper Sean Jones. In the end, Glasgow Irish won 1-0 and showed great resilience to hold a good shape and keep Southside at bay, especially in the second half. Three wins from four is a great return this early in the season.

The club’s fifth friendly of the campaign was against Castlemilk FC at Crownpoint at the end of last month. The Irish had to make a few last minute changes to the line-up, but still fielded a strong squad to play the new Division 1 side. Castlemilk FC had more of the ball, but the Irish were patient and waited for their chances in a match in which some great football was played by both teams. The deadlock was broken when a ball played through the lines saw the Castlemilk striker get on the end of it and put the ball in the back of the net. After the goal, the Irish started spreading the ball better and ultimately upped their game, with some great play from Garth taking it past three players on the edge of the box and hitting a left footed shot into the bottom corner to equalise.

It was a very evenly matched game at this point, but a Castlemilk corner was played into the back post and resulted in a goal. The Irish lads kept their cool and continued to keep the ball and work hard as a team, which seen some nice play and chances created. A ball played up the line to Mathieson from Barr, saw him scored from a tight angle.

At 2-2, with both teams playing well, the match could have gone either way, but some great runs and passing led to Fraser Wright laying the ball off to Declan Harvey whose beautiful chip over the keeper is a contender for goal of the season already. The Irish saw out the 3-2 win, making it and four wins out of five and showcasing a great mentality from the team.

With the Irish on a good run of form, they will be going into this game with confidence, but also being fully aware just how good a team Harps are.

It should be a great game, with both teams looking forward to it and the Irish lads having hired a bus to take down some support to cheer them to ensure a great atmosphere whoever wins.