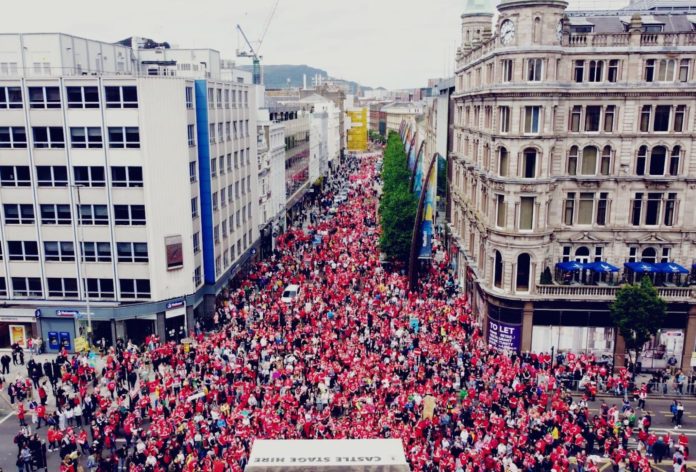 IRISH language activists and campaigners (above) have welcomed the passage of The Identity and Language (Northern Ireland) Bill through its third reading in the House of Lords, bringing the prospect of official status for Irish north of the border one step closer.

The Bill will now return to the House of Commons this autumn for further readings and to enter the committee stage.

This new opportunity to provide a secure future for the Irish Language has been welcomed by both political parties and campaigners, though with some reservations about the form the Act will take if passed.

“We have sought a meeting with the new secretary of state to raise our concerns,” Conchúr Ó Muadaigh, advocacy manager of Conradh na Gaeilge said. “We will engage with all political parties to ensure its introduction to the House of Commons soon after the summer recess, however, until we see this bill fully enacted and indeed implemented in practice, we will continue to push ahead with the campaign for language rights.”

The Bill also provides measures to support Ulster-Scots as a language, and tackles wider issues of identity, but it is the long-awaited Irish language rights which have caused hope among those who have been campaigning to see the strength of the Irish language reflected in the political protection it is given.

Sinn Féin MLA Aisling Reilly welcomed the progress of the Bill in Westminster and reflected on the public demonstrations of support it has received.

“The growing and thriving Irish language community has run a vibrant campaign for recognition of basic language rights—almost 20,000 people were on the streets of Belfast just weeks ago demanding the British Government implement its commitments,” she said. “It’s important we see Acht delivered to give official recognition of the Irish language in this state, appoint An Comisinéir Teanga, repeal draconian laws preventing the use of Irish in our courts and ensure that people can access public services through Irish.”

SDLP Irish language spokesperson Patsy McGlone also praised the work of campaigners in bringing the Bill to this stage, and calmed the fears of those who are suspicious of this development for Irish.

“The Irish language is not a threat to anybody,” he said. “It is enjoyed by people on this island from all walks of life and this legislation will allow the language to continue to thrive and grow for generations to come.”