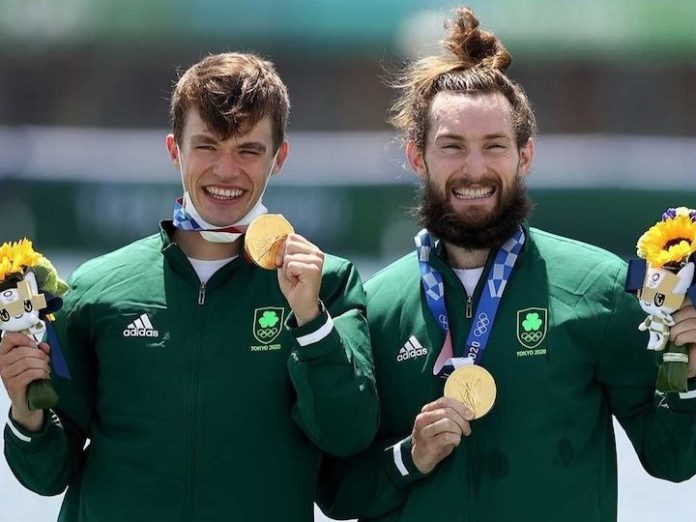 IRELAND’S Olympians have mustered a tally of one gold and two bronze medals so far in Tokyo, with boxing providing some tense actions from the Irish athletes.

It was on the water, however, that Ireland grabbed their gold medal, with Paul O’Donovan and Fintan McCarthy (above) topping the podium in the men’s lightweight double sculls.

The two Corkmen—both from Skibereen—kept a proud record for the district in the Olympics, with McCarthy going one better with O’Donovan who had won silver in the 2016 Olympics in Rio de Janiero when paired with his elder brother Gary.

Becoming the first Irish Olympians to win gold since 1992, the duo edged out Germany by 0.82 seconds in a thrilling finish, and speaking after his victory O’Donovan reflected on the race saying: “We are just trying to do the best we can and hopefully be the best of the rest of them.

“That’s the race plan we had, we do it all the time and it seems to work OK for us. Italy and Germany always go hard, you can count on that, and then slow down a bit.

“Once we were catching up to them we knew we were at a sustainable pace and kept going.

“Winning today and a silver medal last time, I’ll be a bit happier about that. The silver medal is nice but Fintan did the right job and we went straight to the top at his first games.”

Despite the glory of his time in Tokyo, O’Donovan was more worried about returning home to his mother than his new status as Ireland’s only winner of a gold and silver medal at the Olympics.

“I’ve been ignoring her all the while so she’s going to be fairly annoyed, when I get home I’ll get a back of the hand across the face I’d say,” he told RTÉ.

Also one the podium in that discipline were Aifric Keogh, Eimear Lambe, Fiona Murtagh and Emily Hegarty, who finished third behind strong Australian and Dutch teams in the women’s coulees fours to add a bronze to Ireland’s tally.

In the ring there was a further medal for Aidan Walsh, who grabbed a bronze in unusual circumstances.

With boxing always seeing a strong showing from Ireland, Walsh was one of the big hopes, and had looked in good form in the qualifying bouts in which he secured a final sport. He was forced to withdraw from the final against his opponent—Britain’s Pat McCormack—after he appeared to injure himself in celebration following his frenzied semi-final victory over Merven Clare of Mauritius.

“I’m not 100 per cent sure when it happened,” Bernard Dunne, who serves as Team Ireland’s boxing director, said. “As Aidan came out of the ring, he said he felt a bit sore in his ankle. From there we started to monitor it and give him every opportunity that we possibly could to compete. We gave him till the last second today before that final decision was made.

“What Aidan did this week is an incredible achievement. His performance throughout the tournament has been outstanding. And it is great to see him write his name in the annals of Irish sport.

“Just over two years ago we selected Aidan for his first major championship, and over the past few months that potential that we had identified has grown and developed into a world class performance, that reflects greatly on the level of preparation he has put in ahead of these games.”