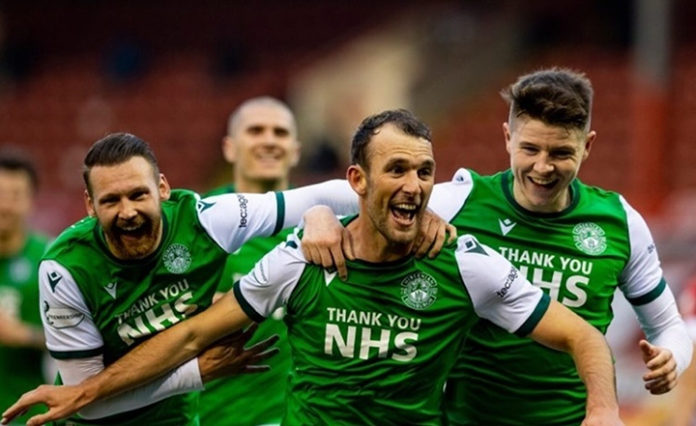 HIBERNIAN’S relatively good 2020/21 season and third placed league finish with subsequent European qualification is to be lauded. Jack Ross, in his relatively short time thus far in the Easter Road hotseat, has built a side which is fairly solid at times and can score goals, of that there is no doubt.

The recent season—played amid the current global catastrophe of Covid-19—saw the Hibees (above) emerge as ‘the best of the rest’ outwith the top two. A good achievement, considering that in the last 30 years the only other Hibs managers to enjoy similar league success have been Alex Miller, Alex McLeish and Tony Mowbray.

Some commentators have thus claimed that the season just past has been Hibernian’s best in decades. Closer analysis of statistics, along with listening to how many Hibs fans actually feel at the moment, can help one easily see that this season hasn’t been quite the roaring success that it could have been.

The main reason for this are the three dismal failures in just seven months at Hampden in the cups, along with a poor record in league matches against Rangers and Celtic.

There has always been a large element of the Hibs support—myself included—whose priority for the team is doing well in the cups and beating Hearts, Rangers and Celtic in the league, with matches against other teams seen as less vital, as long as the team isn’t in relegation trouble. This season in the league, Hibs lost to Rangers three times and lost to a very poor Celtic side once, gaining just four points from a possible 24 against the so-called ‘big two.’ That’s simply not good enough for many Hibbies and Ross must rectify that in the next campaign.

Hibsing it?
In 2016, everyone thought that the phrase ‘Hibsed it’ had been erased from the Scottish Football banter lexicon. Sadly, in 2020/21, that terminology has returned.

First, back on Halloween, The Hibees suffered an embarrassing defeat to lower-tier city neighbours, Hearts, at Hampden in the previous season’s Scottish Cup semi-final. Then, in the League Cup semi-finals at Hampden, Jack Ross’s side was trounced 3-0 by St Johnstone, putting in a hugely disappointing performance, especially considering that had the Hibees won that match they would have faced Livingston in the final.

This season’s Scottish Cup Final saw many Hibs fans dreaming of a second Scottish Cup win in five years. The Hibees have struggled against the Saintees since 2012 and by the time of the last cup-final had lost three times to the Perth side last season. In each of those three defeats, the green jerseys had succumbed to St Johnstone’s superior tactics and organisation. Hibs fans trusted and expected that the manager and the players had something different up their sleeve for the Scottish Cup Final. They didn’t. Instead, the Hibees put in their worst performance at Hampden since 1980, with a predictable and insipid déjà-vu display that played right into St Johnstone’s hands and ensured that the trophy was destined for Perthshire, without the Saintees even having to move out of second gear.

A golden chance to have possibly picked up three major trophies this season has been squandered in an ignominious manner. Blame for that disappointment lies squarely at the door of Jack Ross and the players that he picked for those Hampden showdowns. The only small mercy for Hibs fans regarding all three of the Hampden losses was that they were spared the usual post-defeat traffic jam on the M8 afterwards. Hopefully, Ross can learn from these disappointments and find a way to better motivate his players for the matches that really matter.

Alex McLeish’s side in 2000/01 finished third with 66 points, winning 18 matches and losing just eight. Again, too many draws soured that campaign. 57 goals were scored. Two matches out of 12 against Hearts, Rangers and Celtic yielded wins.

Tony Mowbray’s Hibs side was third in 2004/05 with 61 points, winning 18 matches but losing 12, with very few draws. 64 goals were scored. 12 matches against Hearts, Rangers and Celtic yielded just one win.

Neil Lennon’s Hibs side of 2017/18 may only have finished fourth, but it won 18 league games and lost just seven, acquiring 67 points and scoring 62 goals. That particular Hibs side won five out of 12 against Hearts, Rangers and Celtic.

Ross’ side ended the league season with 63 points, scoring 48 goals, winning 18 matches and losing 11. No matches were won against ‘the three stooges’—though there was one derby loss due to Hearts being in the lower tier.

In all five of the aforementioned seasons, the Hibees reached semi-finals and even finals at Hampden (Ibrox in 1995). Mcleish and Lennon’s teams won more points, while Ross’ men scored far fewer goals than the other four teams mentioned did.

Where Ross’s 20/21 team betters these other high-flying Hibs sides is in away form and in goals conceded. Just five matches were lost away from Easter Road. This meanness at the back is a vast, vast improvement on the shambles that was the Paul Heckingbottom era. Moreover, football evolves and it’s perhaps unfair to compare Ross’ Hibs side to those other sides, as those teams contained far better players than he has at his disposal. If the manager is building from the back, that’s going very well indeed, in the league.

Looking ahead
Hibernian fans now have European football and a friendly against Arsenal to look forward to in the coming months. Some fans, understandably after the cup final, have questioned Jack Ross’s managerial ability in bigger games. At present with Hibs, Ross has a win ratio of 50.6 per cent—in the top flight that’s bettered only by Bob Shankly, Jock Stein, Hugh Shaw and Dan McMichael. While statistics don’t tell the whole story, one thing is clear. If Jack Ross can find a way to win the big, important matches next season, he has a chance to become a true great at Easter Road. If he can’t, then the Easter Road side may well have to look elsewhere for a manager who can once more instil a bit of steel and winning mentality into the team for big occasions.

Were Hibernian’s decent season 2020/2021 to be summarised like a school report card, it may read something like this. “Good overall, shows potential but must do better, particularly in exams.”

With fans hopefully returning to stadiums for the new campaign and with Easter Road full and bouncing once more, 2021/22 looks sure to be emotional and exciting. Hibernian FC has a great chance to build on its league success of the previous campaign and to ‘right the wrongs’ in the cups. With a bit more steel and determination, anything is possible next season for Jack Ross’ Green Jerseys.