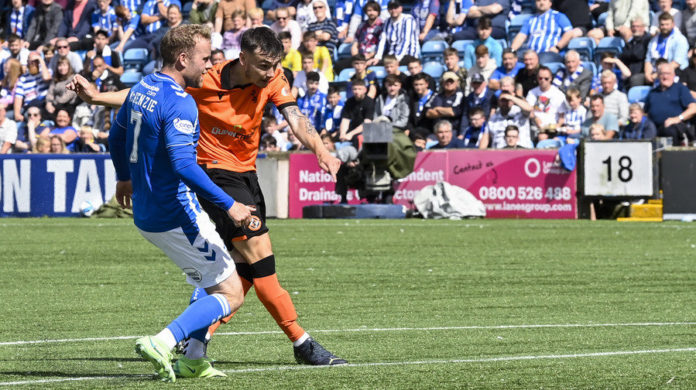 IT’S SAFE to say there have been quite a few changes since last season up at Dundee United.

Firstly, yet another adjustment in management has taken place with the departure of Tam Courts raising some eyebrows. Courts, who took United to their highest league position in nine years and European football once again, has moved on to pastures new after just one season in the Tannadice hot seat. Croatian outfit Rijeka made an approach for the 40-year-old at the end of last season and that seemed his likely destination before a last minute twist saw him move on to Hungary with Budapest Honvéd FC.

So, step up former Hibs boss Jack Ross, who seemed the obvious choice as well as a very popular one with the fans.
Ross has wasted no time in putting his mark on things at Tannadice bringing in five new faces so far to strengthen the playing squad.

In goals, United have brought in the Australian Mark Birighitti from Central Coast Mariners, while also joining from down under, is international left back Aziz Behich who has more than 50 caps for his national side and the experience of playing more than 200 games in the Turkish Superliga as well as a spell with PSV Eindhoven on his CV.

Closer to home, United have signed midfielder Craig Sibbald from Livingston and winger Glen Middleton from Rangers.
Up front the number 9 shirt will be donned by none other than former Scotland striker Steven Fletcher who has joined the Tangerines after being released by Stoke City. It is hoped that Fletcher (35) will provide United with the target man option the club has sadly lacked over the past few years. His experience and influence on and off the pitch were hailed as key factors by United’s sporting director Tony Ashgar who was delighted to secure the signature of the big man.

Arguably the most welcomed signing though has been that of Welsh international midfielder Dylan Levitt from Manchester United who put pen to paper on a two-year deal after a successful loan spell last season at Tannadice.
So too, an extension for American midfielder Ian Harkes has been well-received after contract talks stalled for a short time.

Players on the move from United include Benji Siegrist to Celtic and defender Mark Connolly to Derry City where he will be joined—on loan—by Declan Glass who netted a hat trick for the Candystipes in his first outing in an Irish League Cup fixture.

Pre-season didn’t go so well for United with defeats to Sunderland and Fleetwood Town, the latter now managed by Scott Brown and a former employer of United’s Charlie Mulgrew.

So, it was interesting to see the line-up at Kilmarnock for our first league outing with starting debuts for three of the new recruits.

United started slowly in Ayrshire in a mainly forgettable first-half before Levitt (left) struck a peach into the roof of the Killie net assisted by a clever back heel from Fletcher. After the break, United seemed in control and looked compact and well-drilled and an Ian Harkes chance from a few yards out could have well sealed the deal. Soon after this, Harkes earned himself a needless yellow card by kicking the ball from the Killie keeper’s hands, before he was dismissed for a second offence by referee Willie Collum on 71 minutes, which ultimately changed the face of the game.

United tried their best to shore up the defence and hang on for maximum points, but it was clear they were riding their luck with 10 men and had a lucky escape when an Ollie Watkins shot crashed off the bar with keeper Birighitti well beaten. Killie to their credit, kept plugging away though and got their reward in the 91st minute with a volley from centre half Ash Taylor—befitting that of a striker and making it 1-1. A share of the spoils was a just result in the end, although Ross was obviously the unhappier manager at the final whistle with the late goal denying him his first win.

In his post-match interview, he admitted that he had hoped United would be a little further on in their preparations for their next tie which sees Dutch side AZ Alkmaar visit Tannadice in the Europa Conference League in what is sure to be a tough test for the Terrors.
.