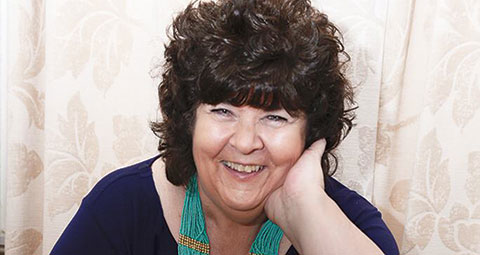 LIZ Clark, much-loved presenter of Celtic Music Radio, has been selected for induction Scottish Traditional Music Hall of Fame for 2017.

The traditional music aficionado is being inducted into the Services to Community section, which focusses on individuals that work tirelessly to help their community and enrich the lives of others through selfless service or charitable work. All awardees are nominated by organisations or the public.

“I was asked back in March if I would accept the nomination or not,” Liz said. “I was delighted to accept it—anything that helps me get the music out there is most welcome. It’s a lovely accolade to receive, it’s not what I do what I do for, of course, but I might afford myself a wee lap round the studio come October!”

Though born in Rutherglen, it was growing up around the traditions of the north east of Scotland is what gave rise to Liz’s passion for traditional music. As a young girl she’d go down to the Kippering sheds and loved hearing the woman singing in Doric. Later, as a teenager, she met the Stewarts of Blair, and received another education in their stories and songs, around the campfires at the berry fields in Blairgowrie. When she was around 15 the first Blairgowrie festival took place, and she again was hooked.

The family moved back to Glasgow when Liz was in her teens. By this point, she’d left school and was out at work, just as the folk revival was starting to get in to full swing. Regularly attending the Glasgow Folk Club and Danny Kyle’s Attic Folk Club in Paisley she was soon in the thick of the scene. Through these and ‘great spiritual psychiatric ward’ that was The Scotia Bar, she met the characters of the day, including Danny Kyle and Billy Connolly. As she puts it, ‘my fate was sealed as a folkie.’

Liz, though, could never be persuaded to be on the stage, instead preferring to work behind the scenes. In these early days it was at the folk clubs—doing the door, selling the pies and doing the raffle. This somewhat understates her organisational skills though. She quickly became relied upon by many, becoming the ‘go-to’ person for those looking for help and advice starting up and running folk festivals and events across Scotland.

She has always been a strong supporter of The Traditional Music and Song Association of Scotland. She began organising the singing competitions at festivals and events, before becoming the director of the national office, as well as of the Glasgow branch. Now retired, the organisation awarded her an honorary membership for her contributions.

When Celtic Music Radio started broadcasting the open stage, they recognised Liz as a natural host, and persuaded her to start presenting shows on the station. Now, having just moved in to their new office, she is right in the thick of it, broadcasting shows throughout the year and playing a vital role in the running of the station.

She’s devoted to giving a foot in the door to new artists, playing them to a global audience and helping to get their careers underway.
“I really enjoy working at Celtic Music Radio,” she said. “It is the only station dedicated to getting ‘our music’ out there 24/7, and making sure that our artists get air play. That said, we don’t have a Celtic music only policy and cover all genres that our presenters bring to the station, be it contemporary, blues, jazz, country, funk, roots and world. We cover all good music!

“We started in 2004, but 2006 was the kick -off year at Celtic Connections for covering the Danny Kyle Open Stage. We have 35 volunteers on board with us now and they’re invaluable.”

Chair of Celtic Music Radio, Alex Jenkins, added his congratulations saying: “Auntie Liz has been an integral part of Celtic Music Radio from its inception. Our aim to support new, upcoming and unsigned music really came from her passion via the Danny Kyle Open Stage. All the team is chuffed that Liz is getting this long-deserved recognition for her input into today’s traditional music scene.”