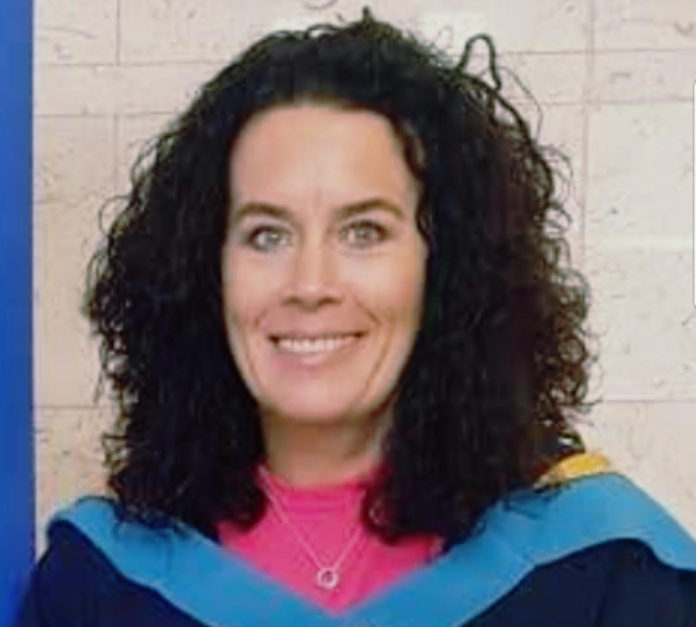 ANOTHER feather was added to the cap of Scotland’s Irish diaspora recently as Lyn Crumlish won a prestigious writing award for her short story Grieve.

Lyn was one of five writers awarded first prize in the competition, held in conjunction with the Mighty Pens organisation and national Scottish newspaper, The Herald. She says in writing Grieve, she wanted to conjure a celestial presence who sees all human fragility, yet brings a sense of hope to both the dead and their surviving families.

Having studied with the Open University for a degree in English Literature and Creative Writing, Lyn has not only been working on a number of short stories but is also is currently writing her debut novel under her pen name, LJ Sexton. Lyn is also a yoga teacher by day, a mother of four and the press officer for the Irish Minstrels CCÉ music group based out of St Roch’s Secondary School in Glasgow.

In the wake of her success, Lyn spoke to The Irish Voice of her joy at winning the award, her passion for writing and her ability to multitask.

“I am woman and we’re fabulous multi-taskers!” she said. “Seriously though, I get up early and write and also try to do some in between teaching yoga classes when kids are at school and university. I think because I enjoy it so much, it doesn’t feel like a chore. I genuinely love writing.

“All my spare time goes on my novel and short stories, so I was delighted that Grieve was chosen as a winner by The Herald and Mighty Pen,” she said. “It’s fantastic to get that wee bit of validation of your work, knowing that your writing is actually ‘no half bad.’ It also gives you a bit more confidence and pushes you to keep writing.

“Writing is such a solitary, subjective thing and folk can either love or hate your stories, so it was great. I’m really chuffed.”

Lyn, who lived in Donegal for eight years, continues to immerse herself in Irish culture in Scotland, most notably through her involvement with The Irish Minstrels, the first branch of Comhaltas Ceoltóiri Éireann formed outside Ireland and the parent group to the world-renowned St Roch’s Ceili Band.

“My cousins all played with St Roch’s years ago, my daddy’s sister’s kids, The McGinley family,” she explained. “Sadly, I didn’t ever get to go up myself, but I’m a huge traditional music fan so I took my eldest girl when she was five, then took the other three when we moved back from Ireland. They had already started playing when we lived in Donegal.

“I am a huge Frank McArdle fan. He is one of life’s good guys and I think what he has done for Irish music through Comhaltas in Scotland is outstanding. St Roch’s has produced some world class musicians and it is all down to Frank, his passion, his tenacious spirit and his drive. He really is a unique character.”

The writer also spoke about her Irish ancestry and explained how her heritage has influenced her work, even to the extent of her selecting her pen name.

“I lived in Donegal for eight years and my parents are Irish, so my writing is heavily influenced by my heritage,” Lyn said. “I am currently writing a book about an Irish girl who walks the Camino Way.

“Theres a wee biography in The Herald but they didn’t include my Irish heritage sadly. My dad was Joe Sexton, (deceased) who came from a place called Lough Gowna in Longford and mum’s family are Kellys from Termon in Donegal. I wanted to use my own name as my pen name for a couple of reasons. I am a Sexton through and through and it’s a strong name that’s not easy to forget! I also feel that it honours my dad’s memory and my Irish heritage. Thank God my husband Michael doesn’t mind. His family are from Moville in Donegal, but he agrees that Sexton is a stronger and more memorable name than Crumlish!”

The Mighty Pens team is a powerful blend of the most experienced book, magazine and newspaper editors and writers in the land as well as page designers, illustrators, photographers, proof-readers, printers, media and marketing experts, social media specialists, sound and audio producers and directors as well as university lecturers. They all have in common the fact that they love books and are all keen to encourage both reading and writing. Between them they have years and years of experience in all areas of publishing and broadcasting.

Mighty Pens Team Leader and Herald Contributor, Bernard Bale, was taken aback by the quality of the entries to this year’s competition and also praised the winners.

“The standard has underlined the quality of education in Scotland, the passion that flows through the veins and the unchallenged ability to tell a good story. Thank you to all those who have given us the great privilege and pleasure of reading your work.”