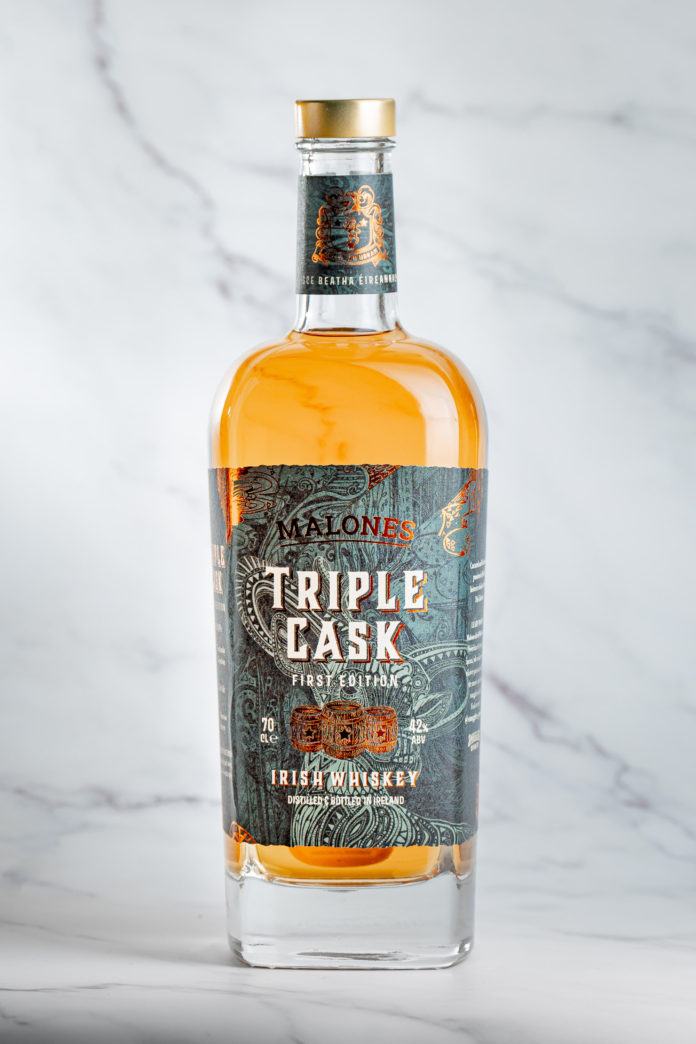 THE family behind Malones Irish bars are bringing their Irish culture to Scotland, one dram at a time. Their latest venture? Malones Triple Cask Irish Whiskey. Watch out Scotch, there’s a new Irish whiskey in town.

The release of this new premium Irish Whiskey is a family affair. Father, Robert and his son, Simon, come from generations of Irish publicans and so know a thing or two about Irish whiskey. Having run a successful pub back in Ireland, and now owners of the award-winning group of Irish pubs Malones Glasgow, Edinburgh and Aberdeen, the family felt inspired to create their own Irish whiskey to show their community what all the fuss is about.

For Simon, creating an Irish Whiskey has always been a dream that is now a reality.

“As a family run business, whiskey is something we are very passionate about,” he said. “Whether you distil, consume or sell whiskey you can’t help but fall in love with all the complexity and variations whiskey has to offer. We have taken our family’s collective decades of knowledge and worked together with one of the best master distillers in Ireland to create a versatile whiskey that represents the best of the old world as well as the new, so everyone can enjoy this amazing liquid that forms such a big part of our culture.”

In line with the inclusive nature of their pubs, a key goal of the family was to create a whiskey that can be enjoyed by everyone. Having observed the rise of Irish whiskey over the last couple of decades in what could be referred to as the new golden age of Irish whiskey, Robert and his sons have also seen how drinking habits are changing. No longer is Irish Whiskey purely a night cap, a drink to wind down the night. It can be enjoyed socially, ordered time after time to accompany a great night out, or poured and expertly mixed in a decadent cocktail. To keep up with these whiskey trends, Malones Triple Cask Irish Whiskey is curated for versatility.

“I challenge anyone that takes a sip of Malones Triple Cask not to enjoy its flavour profile,” Simon said. “We’ve had great feedback from distillers who have tried the whiskey and been left in awe of its palatability.”

The key tasting notes of vanilla, apple and cinnamon make this a delicious whiskey to drink neat, over ice or in a cocktail. The whiskey is a star ingredient in many popular cocktails on offer at Malones Irish Bars, where it is now the house pour. Those who prefer mixing their own at home can find recipes for signature serves including the Liberties Old Fashioned, Malones Highball and classic Irish Coffee at www.malonesirishwhiskey.com.

Having aged in three distinct casks, the whiskey is smooth and complex, with strong layered flavours in the final product. Caramel sweetness comes from ex-Kentucky Bourbon barrels, while Oloroso Sherry contributes the deep flavour of dark fruits. Finally ex-Red Ale casks round off with toffee, oak, and vanilla. The whiskey is non-chilled
filtered to achieve maximum retention of these intricate flavours.

The impact of the three casks are evident. On the nose, the whiskey gives fresh citrus alongside crisp vegetal notes. Oak spices develop into hearty dried fruitcake. On the palate, green apples evolve into demerara sugar and caramelised pear, finishing with an autumnal impression of spice, sweet apple, cinnamon and silky vanilla.