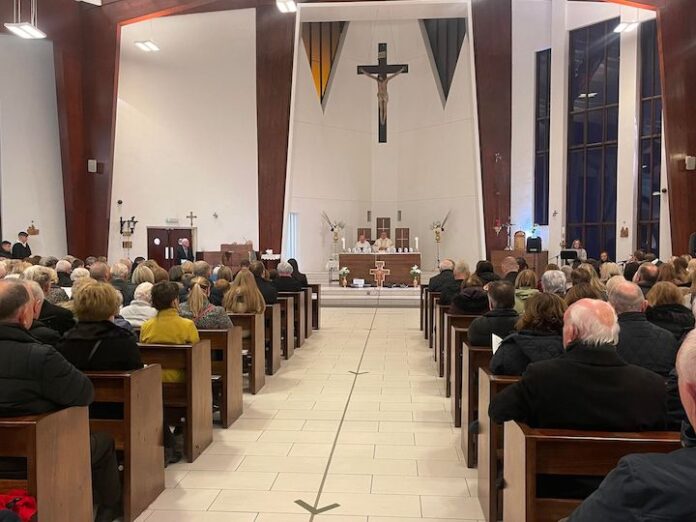 A MONTH’S Mind Mass for those affected by the tragic explosion in Creeslough, Donegal, was celebrated in Blessed John Duns Scotus Church in the Gorbals area of Glasgow.

The Mass was concelebrated by Fr John Carroll and Fr Tony Sweeney and it replicated the Masses celebrated in Creeslough, with 10 candles representing the 10 victims being carried by to the altar by Glasgow’s Irish community—Tír Conaill Harps GAC, the city’s Donegal diaspora and members of the Creeslough community living in Glasgow

Both the Second Reading and the first Bidding Prayer were read As Gaeilge and the offertory was carried by Neilli Doherty and Terence McBride from Creeslough, while Martin McGill’s sister, Marie Louise McLeod, and Martin’s nephew, Jacob Lauder, carried the Donegal Flag as a symbol of the strong Glasgow/Creeslough connection.

The music was conducted by Cárl ó Dochartaigh and Áine Coyne, assisted by Óisin and Grace Cook who collectively represented the counties of Donegal, Mayo, Derry and Down.