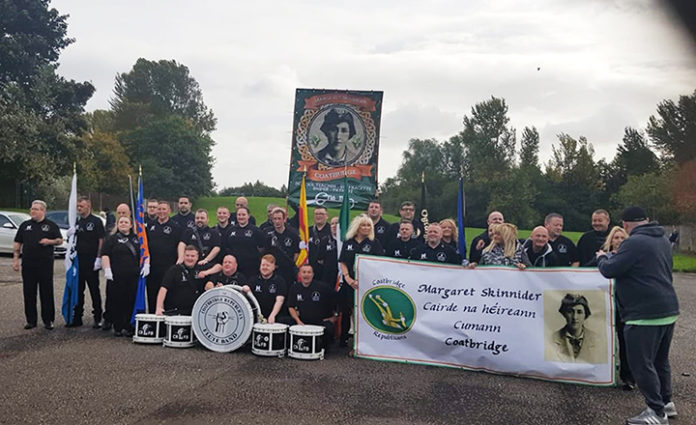 THE 50th anniversary of the passing of Scots-born Irish revolutionary, Margaret Skinnider, was marked on both side of the Irish Sea recently.

In Scotland, near to her birthplace of Coatbridge, an anniversary march (above) to Whifflet Park was organised by Cairde na hEireann with musical accompaniment by the Coatbridge Republican Flute Band and function in the town afterwards.

“Today we remembered Margaret on the 50th anniversary of her death,” a spokesperson for the Margaret Skinnider Cumann of Cairde Na hEireann said. “We will always keep her name alive in the town of her birth. Thanks to our comrades in the Coatbridge Republican Flute Band and to all those who came along to show support.”

Meanwhile, in Ireland, three members of The Margaret Skinnider Appreciation Society travelled from the home
of Margaret’s ancestors in Monaghan, to her burial plot in Glasnevin Cemetery Dublin to lay a wreath on behalf of the society (below).

Thanks to a local florist—Michelle at the The Petal Plot—a beautiful floral display was created that includes greenery from the hedgerows of the county’s townland, and Margaret’s ancestral homeland, of Cornagilta, such as Hedera Helix (Wild Ivy), Dryopteris (Fern) and Lonicera Nitida (Box Honeysuckle). There were also Lisianthus (Prairie Gentian) flowers, white, tipped with blue for Scotland placed at the plot.

In the wake of that poignant memorial to Margaret’s memory, members of the society along with Stephen Coyle, secretary of the 1916 Rising Centenary Committee (Scotland), marked her anniversary with a ceremony at her roadside memorial in Cornagilta, before retiring to a nearby school for refreshments.