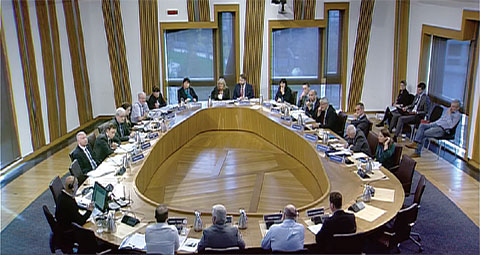 BEMIS, the body representing Scotland’s ethnic minorities, has launched a stinging criticism of a hate crime review, which includes the Offensive Behaviour at Football Act, as the Justice Committee at Holyrood led their own parliamentary review of the act.

In a submission to MSPs, BEMIS outlined their assertion not only that the act may currently be a breach of human rights legislation, but also that Lord Bracadale should not be presiding over any review which includes the OBFA—given his involvement in one of the leading cases in which the act was used.
The latest attack on both the existence and use of the OBFA comes as it moves yet another step closer to repeal, with a range of stakeholders giving evidence before the Justice Committee (above). Among those giving their submissions were fan groups from Scottish football, and with cross-party support among the opposition at Holyrood the calls for a repeal from those most affected by the act are being heard more loudly than ever.

Speaking of the review being led by Lord Bracadale, a BEMIS representative outlined to The Irish Voice why it should not include the Offensive Behaviour at Football Act and why a re-classification of ‘offence’ as ‘hate crime’ may have implications for Human Rights legislation.

“Lord Bracadale is an esteemed former member of the judiciary and we do not question his abilities. However his review is to cover hate crime legislation, the OBFA is not primarily piece of hate crime legislation and is currently being reviewed by parliament.” they explained. “Section 1(2)(e) of the OBFA covering general offence to a reasonable person and the procedural dynamics utilised to progress a charge are highly problematic.

“They are routinely founded on the individual interpretation of Police Officers analysing the potential that somebody, somewhere may be offended by another’s actions.

“There has been a narrative developing that the repeal of the act should wait for Bracadale to respond, however these are clearly two separate processes. The interest groups who have informed the parliamentary review may not participate within the Bracadale review and vice versa. The OBFA also has utterly unique characteristics covered by the notion of policing, prosecuting and criminalising subjective offence.

“This reflects the reality acknowledged to the Justice Committee by the Law Society of Scotland that the OBFA has a special character and provides a catch all offence—via section 1(2)(e) of the act—covering offensive behaviour. Indeed the Law Society elaborated that due to the nature of this statute: ‘The catch-all provision in section 1(2)(e) might be subject to further judicial interpretation.’

“BEMIS’ prognosis is that appeals of this nature could very well be progressed via a human rights lens. Indeed our additional submission to the Justice Committee was an appeal to Human Rights advocates and Commissions to critically analyse this section which is re-casting ‘subjective’ offence as ‘Hate Crime,’”

In their earlier submission to MSPs, BEMIS had further criticised the inclusion of the OBFA in Lord Bracadale’s hate crime review.

“Given that we know that 99 per cent of hate crime aggravations in 2016/17 took place outside of the scope of the act’s provisions it remains a mystery why the football act is routinely described as hate crime legislation,” they said.

The Scottish Government, however, defended the review being lead by Lord Bracadale, saying through a spokesperson: “Lord Bracadale is conducting a review of all hate crime legislation in Scotland with a view to making sure it is fit for purpose in the modern multi-faith and multicultural country that Scotland is.

“Lord Bracadale is an independent former member of the judiciary and is working with a reference group of nine experts to develop and deliver the review—which has been welcomed by all political parties in the parliament.

“It is entirely right for them to consider any piece of legislation which includes elements aimed at tackling hate crime.”

With BEMIS’ criticism extending to a submission that the act may be in breach of the European Convention of Human Rights, their representative further explained the key areas in which BEMIS outlined the potential breaches to the Scottish Government.

“Our second submission to the Justice Committee elaborates on Article 7 of the European Convention on Human Rights which covers ‘no punishment without law,’” they explained. “This basically means those who face criminal proceedings should, prior to their charge and prosecution, have been aware that their behaviour would constitute a criminal offence. Religious or racial aggravations are relatively simple to diagnose and apply statutes to appropriately. Subjective offence predicated on an individual’s interpretation of a contested social concept is not as simple and is open to judicial interpretation as has been the case in relation to the OBFA.

“Therefore it stands that citizens may not be aware they are committing a crime and then subsequently face the prospect of being enveloped into the Criminal Justice System. BEMIS’ position, as an equalities organisation, is that we are required to highlight that anomaly to every section of society it affects.”

With the relationship between Scottish and European courts coming under renewed focus as Brexit negotiations and Britain’s disengagement from the European Union continue to occupy the thoughts of both those making and those applying the law, BEMIS highlighted the OBFA as one area where the attention is needed presently regardless of what the future relationship between the courts holds.

“There are also very specific and narrow margins of appreciation available to domestic jurisdictions under the supervision of the ECHR in relation to the derogation of Article 10 covering Freedom of Speech,” the BEMIS representative stated. “The three key tests in relation to this are: if the offence is proscribed by law; if it is necessary in a democratic society; and is in the interests of national security.

“The case law emanating from the European Court (which Scottish courts are obliged to give due regard to) has taken several definitive stances in relation to this article, which is considered to be fundamental to the functioning of a democratic society.

“It remains to be seen if the act and specifically section 1(2)(e) would pass this test and be considered a proportionate legal response to an issue of ‘subjective offence,’ not to be confused with hate crime which is quite clearly illegal and has been a backbone of the common law for years.”