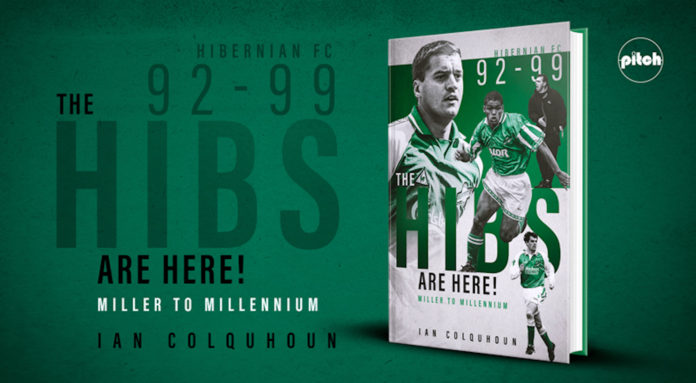 HIBS columnist for The Irish Voice, Ian Colquhoun, has written a follow-up to his previous acclaimed book on the Edinburgh club, From Oblivion To Hampden, which culminated in the club’s successful League Cup-winning season of 1991/92.

Ian is a disabled author and Hibs fan from West Lothian who has lived most of his life in Edinburgh and whose all-time favourite Hibs player is Darren Jackson. His first experience of journalism came at the age of 14, while on work experience at Easter Road, when he interviewed groundsman Pat Frost. He has also co-written Hibernian On This Day, which he co-wrote with his friend Bobby Sinnet, who has written the foreword and one of the chapters in this latest book.

This latest volume, The Hibs Are Here: Miller to the Millennium, charts the period from 1992 to 1999 and sees the author gain fresh insight via exclusive interviews with a number of the club’s players, coaches and managers and thread it together with a fan narrative and analysis of that iconic decade. He relives the joy of a UEFA Cup run, reaching another cup final and an historic third-place finish in the Scottish Premier Division; the highs and lows of an instant promotion following relegation; and the heartbreak of losing that final and two semi-final defeats. From the pen of a passionate Hibs fan who was there for it all, The Hibs are Here is a wonderful trip down memory lane for any Hibernian supporter.

The Hibs Are Here follows Hibernian’s 1990s journey—a fascinating period on the field and a momentous time off it—as Hibs transitioned to being a truly modern football club. In the course of the book, readers will discover:

—How, in 1997, the club was briefly reinvigorated with a new boss and new ideas, only to suffer a relegation, yet bounced back within 12 months and returned to the top flight far stronger

—How the Bosman ruling of 1995 saw Hibs go from having a wholly British squad to signing a legion of foreign stars—some good, some mediocre

—How big changes in Scottish, British and world football in the 90s affected Edinburgh’s premier Club

—A special chapter on the UEFA Cup trip to Anderlecht

—A look at 1990s Hibs fan culture— the songs, the supporters and the club’s cultural coolness

—Quirky and interesting stories about the club from that era, some funny, some unbelievable, some sad, some absolute nonsense—all fascinating

Perhaps most importantly, however, was the fact that writing the book and putting together a special merchandise package for the first lucky recipients of The Hibs Are Here, was a cathartic process for Ian who had suffered PTSD during lockdown.

“I managed to counter my PTSD by curating the merchandise package that went with the first 50 issues of the book,” Ian explained. “Designing and choosing the merchandise really helped me mentally, and those packages weren’t for profit, I just wanted to do something nice for the fans in my own way.”

The Hibs Are Here: From Miller to the Millenium is published by Pitch Publishing, priced at £16.99, and is available from all good bookstores and on Amazon