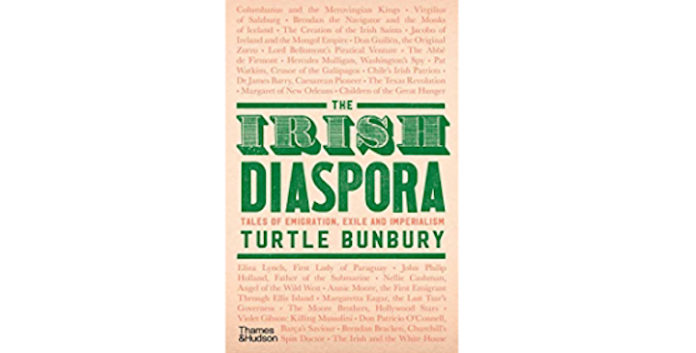 A NEW book will chart some of the intriguing figures who help make up the global Irish diaspora, after award winning author Turtle Bunbury turned his gaze to those Irish people who have left their mark outside the country.

With more than 80 million people around the globe claiming Irish descent there are no shortage of candidates for Mr Bunbury to examine, and his latest work focuses on the interesting and unusual stories of the Irish abroad from early Christians to the court of the Russian Czar.

The Irish Diaspora: Tales of Emigration, Exile and Imperialism, features 42 stories, and travels through time to cover the many centuries in which the Irish, in various waves, made an impact on the wider world.

“It kicks off with missionaries, because that’s where you have to start,” Mr Bunbury told the BBC. “I don’t know how long people have been going from Ireland to other countries. Since time began!”

Following from these beginnings the book examines the impact of the Irish on North America and Latin America, with a particular focus on the Scots-Irish who arrived in Ireland in huge number before a large portion of them subsequently departed for the New World of America.

The book also adds a new perspective on the view of Irish emigration, challenging the dominant narrative by examining the different circumstances in which people left Ireland.

“Quite a lot of the time when we think of the Irish and going abroad you think of emigration and that whole emigrant experience, and yes, that is huge and that is a massive part of the book, but there is also that whole imperial thing as well, because Ireland was also a part of the British Empire for a long time, and even before that the Irish were going into Europe with the armies of the Plantagenet kings,” Bunbury said.

Already widely celebrated in Ireland for his Vanishing Ireland projects, which aim to preserve the stories of Irish people before they disappear, his latest effort tells the stories of the Irish outside Ireland, and at the same time show the effects the Irish people have had on historic global events.

“It’s the [story of] the million Irish who live abroad today, most of them in the UK, and it’s the story of the earlier immigrants and what that makes up today,” he concluded. “About 80 million people, or about one per cent of the planet, can claim to be a little bit Irish.”

The Irish have always been a travelling people. In the centuries after the fall of Rome, Irish missionaries carried the word of Christianity throughout Europe, while soldiers and mariners from across the land ventured overseas in all directions. Since 1800 an estimated 10 million people have left the Irish shores and today more than 80 million people worldwide claim Irish descent.

The advent of the British Empire ignited a slow but extraordinary exodus from Ireland. The pioneering explorers of the Tudor Age were soon overtaken in number by religious refugees, the ‘Wild Geese’ who opted to live outside of the Protestant state and to take their chances in the Spanish or French empires, or in America. The Irish played a pivotal role in the foundation of the United States of America, just as they would in the Civil War that followed eighty-five years later. The lives of Irish emigrants wove in and out of the major events of global history, including the Abbe Edgeworth, confessor to King Louis XVI at his execution during the French Revolution; Margaretta Eagar, governess to the daughters of Nicholas II, the last Tsar of Russia; and William Lamport, who travelled from County Wexford to Central America, and became Don Guillen, a martyr for Mexican independence.

Turtle Bunbury explores the lives of those men and women, great and otherwise, whose journeys—whether driven by faith, a desire for riches and adventure, or purely for survival —have left their mark on the world.