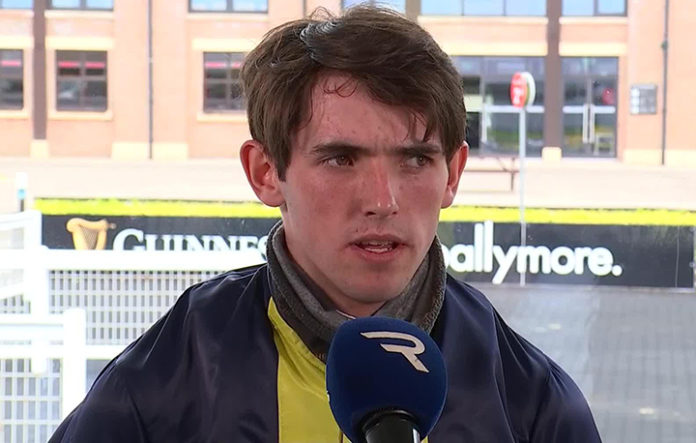 WELL, we are now into the Irish jumping season and the jockeys’ standings at this stage is quite different from last year’s. Darragh O’Keeffe is currently on top with 31 winners, Jordan Gainford is next with 28 winners and Shane Fitzgerald follows on from that with 25 winners. O’Keeffe (above) has done well to top the table at the halfway point of the season, but all three are making great impressions this term.

There have been injuries to the top jockeys however, and this has played a part in the championship makeup. Paul Townend, Rachael Blackmore, Jack Kennedy, Danny Mullins, Davy Russell, Sean Flanagan and Keith Donoghue, to name a few, have been away from the saddle at one stage or another in the opening months of the campaign.
What is very encouraging is that the three young jockeys currently topping the table are aged 21, 20 and 23 respectively.

Shane Fitzgerald’s victory on Assemble recently in the Guinness Kerry National was the biggest of his career and it came in the Gigginstown house colours. Of his 24 winners, 25 per cent have come from Gigginstown (four winners) or JP McManus (two winners).

The jockeys’ standings will change as we move into the last part of the campaign as the top jockeys return, but it is good to see the emergence of these young jockeys.

One Irish jockey, riding in the UK, is Brian Hughes who rode a 235/1 treble at Kelso recently to take him to 62 winners in the UK Jump Jockeys’ Championship table. It would be nice for him to be crowned champion again in the UK.

Interference rules
Aiden O’Brien has spoken about the ongoing reluctance to address the interference rules in Ireland and claimed that Shane Foley should have received a nine-month ban after his win on No Speak Alexander in the Matron Stakes at Leopardstown last month.

Foley received a five-day ban for impeding O’Brien’s horse Mother Earth, who was impeded, something the trainer labelled as ‘dangerous.’ O’Brien admitted that Ryan Moore, his jockey, should also have been punished for his ride on St Mark’s Basilica in the Irish Champion Stakes on the same day adding: “Ryan should have corrected his horse and not let him drift, but pulling a horse [No Speak Alexander] in like that is madness and letting it go is wrong.”
It will be interesting to hear what the Irish Horse Racing Board have to say!

A lucky escape and Longchamp
UK Champion Jockey, Oisin Murphy, was very lucky not to suffer more serious injuries after being thrown into the rail in the Salisbury Paddock. He was taken to hospital, received some stitches to his lip, was checked over and was able to race the next day. It could have been a lot worse. There was good news too with regards to two injured jockeys—Robbie Power and Danny Mullins—who it was announced would be back soon.

In the recent Prix De L’Arc De Triomphe race at Longchamp, German horse Torquator Tasso emerged victorious at a price of 80/1. Dermot Weld’s Tanawa finished second and O’Brien’s Snowfall finished sixth in a race run on a very soft going course, which wouldn’t have suited most of the horses.