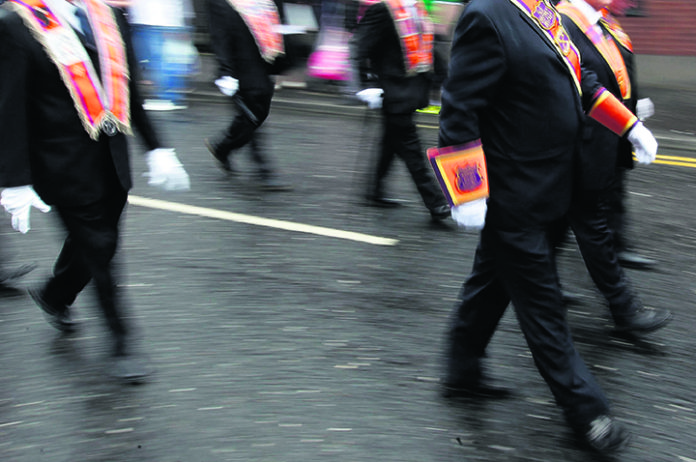 THE prospect of a Parades Commission for Scotland has been raised by First Minister Nicola Sturgeon following police reports of ‘racist and sectarian singing’ during a day of Orange parades in Glasgow which once again saw failings by Police Scotland and Glasgow City Council.

In addition to anti-Irish and anti-Catholic outbursts—as identified by Chief Superintendent Mark Sutherland—parades were also routed past Catholic churches and were met by protests after the police and council failed to act in rerouting the contentious marches.

“We are aware that on a number of occasions there have been outbreaks of racist and sectarian singing by some of those attending to support the Orange Order processions, this is utterly unacceptable and we completely condemn this behaviour,” Chief Superintendent Sutherland said. “Once again, we see a number of people intent in causing offence and stirring up hatred by singing unacceptable sectarian and racist songs.”

Government action
With public tolerance for such marches falling amid widespread disruption and racist and bigoted behaviour, the Scottish Government now looks poised to act by launching a Parades Commission to oversee the approval and routing of such parades.

With an established Parades Commission in the North of Ireland, marches there are governed by standardised regulations and have legally enforceable powers to reroute and restrict parades. Formed in 1998, it was a response to the widespread civil unrest which followed the Drumcree protests. Given the scale of challenges faced by local residents during that crisis, the launch of the commission helped control parades and establish a new framework.

However, with simpler problems and solutions in Scotland, the need for such a commission is less clear, with campaigners such as Call It Out reminding the government that legal powers already exist to prevent such situations occurring here.

The potential for a commission was raised by SNP MSP James Dornan, who, speaking at First Minister’s Questions, said: “Recently we’ve heard shameful reports that Glasgow City Council is receiving death threats when any possible restriction of Orange parades were discussed, and I’m in no doubt that, just as in Northern Ireland, a Parades Commission would go a long way towards taking some of the heat out of the discussion.”

The First Minister vowed to show a ‘zero tolerance’ approach to unacceptable and criminal conduct at parades as she confirmed that the Justice Secretary will be asked to explore the possibility.

“I have asked the Justice Secretary to consider what further action could be taken to maintain the important balance of rights between peaceful procession, freedom of speech but also the ability of people to go about their daily lives without feeling unsafe and being free from harassment,” she said. “I’ll ask the Justice Secretary to consider the possible creation of a Parades Commission as part of that.”

Simpler solution?
The reaction to the discussion around a Parades Commission saw many wonder why such an extensive solution is being sought in order to solve the simple issue of routing Orange parades away from Catholic churches, something which local authorities have the power to do.

Speaking in the aftermath of the announcement at Holyrood, Jeanette Findlay, the Chair of Call It Out, explained the group’s position that such a commission is not required and indeed is only being touted following yet another failure to act.

“The First Minister has… asked the cabinet secretary to actively consider a Parades Commission to resolve the issue of anti-Catholic marches,” she said. “It’s really important that people understand that a Parades Commission is a concept from the North of Ireland, which has a completely different legal framework.

“Scotland is not a post-conflict society. We have a complete set of human rights legislation and equalities legislation, and the only thing that needs to be done in relation to these anti-Catholic marches is to apply the law consistently and for local authorities to use the powers that they have in order to protect the Catholic community—specifically, to prevent anti-Catholic marches from passing Catholic churches.

“This is only being done to distract from the fact that they have not dealt with it and they have not applied applied the law. That is all they need to do. If you think that a Parades Commission is a sensible or an innovative idea then you are completely wrong. As far as I am concerned we will oppose such an idea. We will oppose it and make sure that is does not come to pass, or if it does come to pass we will have nothing to do with it and we will actively campaign against it.”

With future parades in the remainder of the year still listed as passing Catholic churches, the commitment of authorities in dealing with the issue using the powers they currently have will be tested once again.