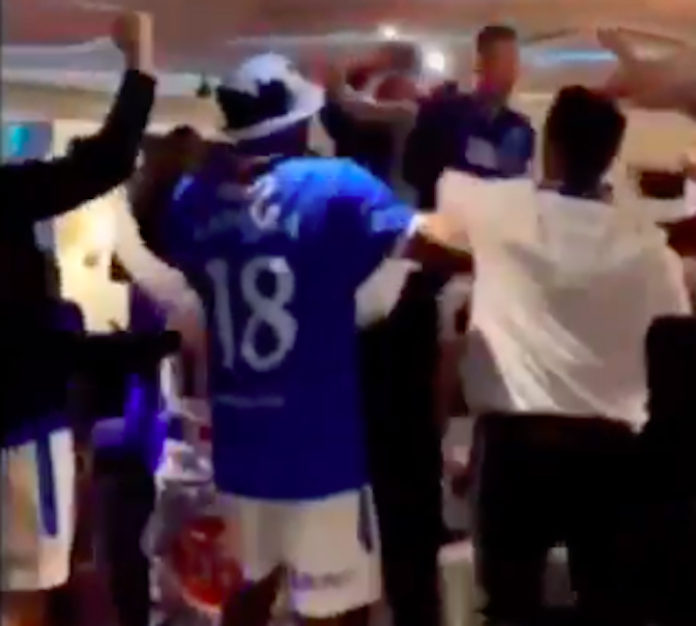 POLICE Scotland have launched enquiries following the circulation of videos of the Rangers first team celebrating this weekend.

It is alleged that the videos show members of the squad singing ‘F*ck the Pope’ while singing along to Neil Diamond’s Sweet Caroline.

When contacted by The Irish Voice, a Police Scotland spokesperson confirmed that complaints had been received and that they would be investigated.

“We are aware of the video circulating on social media,” the spokesperson said. “And we will be carrying out enquiries.”

Numerous individuals have made complaints to Police Scotland, with one saying, “I have chosen to report this as a hate crime and would encourage others to do likewise to start to seriously tackle the anti-Catholicism and anti-Irish racism that has blighted Scottish society for centuries.”

The video has been shared in the aftermath of a weekend of violence in Glasgow as Rangers supporters breached lockdown restrictions and numerous incidents of anti-Catholic and anti-Irish behaviour were reported.

In addition, police officers were injured when missiles were directed at them as they attempted to finally clear George Square after thousands of supporters gathered there after marching from Ibrox.

In preparation for the disorder, businesses were advised to close for the day, with Irish bars such as Connolly’s in Glasgow’s Merchant City and the Celtic club shop on Argyll Street staying closed.

Following the violent scenes throughout the day, many more businesses in the city centre also took the decision to close.

The aftermath of Saturday saw many politicians finally call out the anti-Catholic bigotry, though there were few mentions of the anti-Irishness which was also on display.

Following on from a promise made during the Call It Out hustings in the run-up to the recent elections—when James Dornan MSP pledged to encourage the use of more accurate terminology—both Justice Secretary Humza Yousaf and First Minister Nicola Sturgeon directly mentioned anti-Catholic prejudice.

“In normal times, the violence [and] vandalism, [and] the vile anti-Catholic prejudice that was on display, would have been utterly unacceptable,” the First Minister said. “But mid-pandemic, in a city with cases on the rise, it was also selfish beyond belief.”