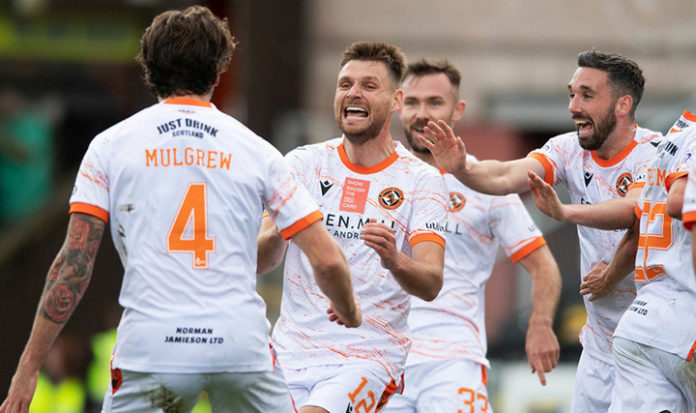 THERE is at last an air of positivity around Tannadice Park that has been sorely absent for a long time.

Head coach Thomas Courts has transformed this current group of players into a highly focused and balanced side who are now looking like a force to be reckoned with in the top flight.

United (above) were sitting fourth in the table after completing the first full round of games with a draw at Livingston, in a game in which they’ll be disappointed not to have taken maximum points after the hosts were reduced to ten men. Falling behind to an unfortunate Nicky Clark own goal, it was Peter Pawlett who gave the 2000 travelling Arabs something to cheer about. As hard as they tried to break Livi down though, the home side stood firm defensively and held out for a share of the points.

The draw however stretched United’s unbeaten league record to seven games, before the Tayside derby with St Johnstone saw that come to an end with a 1-0 home defeat.

Courts has built his side on solid foundations, recruiting wisely and getting the best from the players he has around him. There is a belief among the players and fans alike that measures are afoot to secure a positive future of the club.

Thankfully it’s no longer a case of square pegs in round holes as we saw last season with the attempts to accommodate three strikers, with one playing out of position, as Courts seems to possess excellent tactical nous.

From the back out he has solid goalkeepers in Benji Seigrist and Trevor Carson, a concrete back four and a host of talent in midfield which includes, Ian Harkes—September’s Cinch Premiership Player of the Month—the sublime Jeando Fuchs, Dylan Levitt on-loan from Manchester United, who has been a great acquisition, the new ‘Flying Finn’ Ilmani Niskanen, who has the skill and pace to hurt any full back in the league and the evergreen Peter Pawlett.

Up top United are still a little bit shy with only really Nicky Clark to call upon since the injury to Marc McNulty which will see him miss out until around about New Year.

United have though brought in French striker Maxime Biamou on a deal until the end of the season after the player became a free agent after leaving Coventry City in May. The 30-year-old Frenchman has all the attributes to be a success in Scottish football according to the manager. Struggling for fitness at the moment by his own admission, we did see signs that ‘Big Max’ may well be the missing link when he came on a sub at Livi to force a fine save from the keeper from a powerful header.

It’s becoming increasingly difficult to write an article on Dundee United without highlighting the effect 35-year-old Charlie Mulgrew has had on the team since his arrival at the start of the season.

The calming influence he has on the others around him is clearly visible and his range of passing has been highly impressive and conducive to manager Courts style of play. Solid at centre back along with counterpart Ryan Edwards, United have only conceded eight goals to date.

Indeed it was the combination of these two who got the ball rolling in a 2-1 win over Motherwell with Mulgrew, skipping past the Well left-back with a trick and placing a superb pinpoint cross onto the head of Edwards at the far post. A goal any winger and striker would have been proud of. Surprising as that was, the best was yet to come from Charlie with a sublime winner with a ‘Chuck Norris like flick’ finding the net. A man of the match accolade was well-deserved after a fine display of athleticism and leadership which had the Tannadice crowd on their feet in appreciation.

It was also a good month for breaking hoodoos with a victory over Hibs. Maybe it was the cup exit to the Capital side that helped fire them on with Courts’ side producing a flawless display to win in Leith for the first time since 2014 and run out 3-0 victors with goals from Nicky Clark, Ryan Edwards and young Kieran Freeman. This was easily United’s best display of the season and was hailed by some pundits as ‘simply magnificent.’ For the record, this was United’s tenth attempt at overcoming the Easter road side and therefore most welcome and celebrated fittingly after such a long wait.

Although the month ended with that 1-0 home defeat to St Johnstone courtesy of an Ali Crawford goal in the 17th minute, United played some excellent stuff, but they just couldn’t find their way past an inspired Zander Clark in goal, who made sure they left Tannadice with all three points.

Still, if you’d have asked most Arabs would they be happy sitting in fourth place in the league having taken points off Celtic and Rangers, they’d have bit your hands off for it