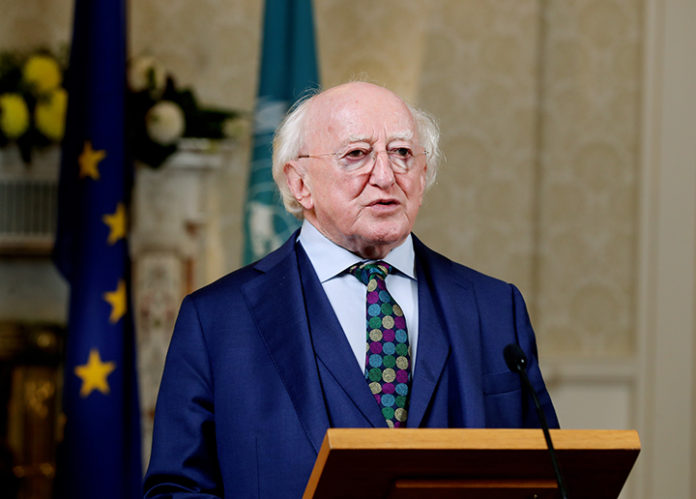 PRESIDENT Michael D Higgins (above) has defended his decision to decline an invitation to attend a service marking the partition of Ireland, explaining that after reflecting on his invitation it would be ‘inappropriate’ to attend such an event.

Under the title of ‘marking the centenaries of the partition of Ireland and the foundation of Northern Ireland,’ the church service will be attended by the queen, who will travel to Armagh for the occasion, but it has prompted President Higgins to comment on the political nature of such an event.

“It isn’t a neutral statement politically,” he said. “Let’s be clear… that’s why doing commemorations is difficult.”
Speaking about his decision not to attend, President Higgins explained that his declining of the event was not a ‘snub,’ but rather a carefully taken decision about what was appropriate for the President of Ireland to attend.
“I am not snubbing anyone and I am not part of anyone’s boycott of any other events in Northern Ireland,” he said. “I wish their service well but they understand that I have the right to exercise a discretion as to what I think is appropriate for my attendance.”

He also shared the inappropriate form of the invitation, addressed as it was to the wrong President.

“The organisers [of the event] writing to my office have always referred to me as President of Ireland,” he clarified. “The reference to the president of the Republic of Ireland is really the remark of the leadership of the DUP,” he said. “You might remember, I’ve had no difficulties about appearing with Her Majesty in Northern Ireland. We’ve met and talked, and neither have I had anything to do with boycotting events. I hope we can help with each others’ events.
“I have gone up to Northern Ireland to take part in events. There often has not been a great deal of traffic down from the DUP people who are criticising me now.”

His decision not to attend surprised Archbishop Eamon Martin of Armagh, who stated that while the event would be non-political, such a situation is the result of the disharmony created by the partition of Ireland in 1921.

“It is something that we feel very anxious to try to create a space where we all together this year could reflect on what happened in 1921, the Archbishop said. “I think it would have been very special, if the President had been able to attend, and it was a bit unexpected when we heard that he wasn’t able to come.

“But we would still be hopeful that this event, which is completely non-political; which is a moment of prayer and a moment of worship, and also a moment of lament because what happened in 1921, as some of my predecessors at the time said, would be a source of perennial discord and stress. And here we are 100 years later on this day, with the repercussions of what happened that year.”