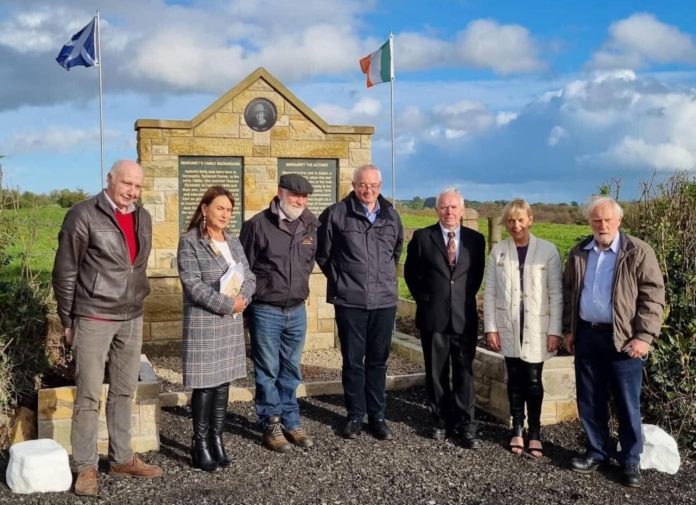 ON SUNDAY October 24, a wreath-laying ceremony at the Margaret Skinnider monument in Cornagilta, Scotstown, County Monaghan (above), marking the 50th anniversary of her death, preceded formal addresses from Deirdre O’Connor, Deputy General Secretary and Treasurer of INTO and Stephen Coyle, Scottish historian and author. At the commencement of proceedings Josephine O’Hagan, Chairperson of the Margaret Skinnider Appreciation Society (MSAS) welcomed everybody for coming.

Deirdre O’Connor stated that Margaret Skinnider was a role model for her commitment to education and trade unionism. Born, raised and trained as a teacher in Scotland, Margaret’s earliest activism took root in her association with the militant Women’s Social and Political Union (WSPU) and, after settling in Ireland from 1919 onwards, she worked for the Transport and General Workers’ Union and for the Workers’ Union of Ireland. She joined the INTO in 1928, having been appointed as a teacher in the Sisters of Charity Primary School in Kings Inn Street in Dublin’s inner city. Hers was a powerful voice when the INTO went on strike in 1946 over long-held grievances on pay and pension matters, and she was a member of the Strike Administration Committee.

Margaret was elected to the Central Executive Committee of the union in 1949 and took part in a Commission which recommended that women teachers’ pay would be the same as that of single men and in this we can see the staunchly-held stance of Margaret Skinnider for the women’s’ cause of equality. She was elected unopposed as President of the INTO in 1956, represented the teachers of Ireland at a world conference in the Philippines.
In conclusion, Ms O’Connor said it was her hope that many more teachers from far and near would visit the ancestral birthplace of one who had given so much to the causes which she had served.

Preparing to rise
Stephen Coyle gave a detailed account of the early life and background of Margaret Skinnider. Her father, James—a stonemason to trade—emigrated to Scotland in the mid-1870s. He married Jane Doud in 1880 and Margaret, the
second youngest of seven children was born in Coatbridge in 1892. At a later stage, her father sustained a serious workplace injury to his leg and the family moved to Glasgow where he began a thriving and successful second-hand clothes business. Margaret succeeded at Notre Dame Teachers’ Training College where she majored in mathematics. Clydeside was a seedbed of socialism in the early years of the 20th Century and there was a good deal of industrial militancy. In 1915 Margaret joined the Anne Devlin Branch of Cumann na mBan. The membership was 30 to 40 strong, overwhelmingly young and unmarried with a high proportion of schoolteachers. She became active in Conradh na Gaeilge and always wrote her name in Irish.

As part of the preparations for the Easter Rising, members of the Anne Devlin branch travelled constantly from Glasgow to Dublin with guns and ammunition. Two of these women were Margaret Skinnider and Sarah O’Neill. Lizzie Moran—a dressmaker—made waistcoats and jackets with hidden pockets for carrying guns and ammunition unobtrusively.

On Holy Thursday, 1916, Margaret returned to Dublin and joined the Irish Citizen Army in Liberty Hall at the invitation of Countess Markiewicz.

On Monday April 24, with the Rising underway, Margaret was sent to scout for the St Stephen’s Green Command.

“I was only a girl on a bicycle,” she said. “It was a great moment for me. At least all the men were standing ready awaiting the signal. In every part of Dublin, similar small groups were waiting for the hour to strike. The revolution had begun!”

She saw the tricolour raised above the GPO as the revolutionary forces occupied the building, then delivered another flag to be raised atop the College of Surgeons, in her words ‘a small one I had brought on my bicycle from headquarters. We were all happy that night.’

On Tuesday April 25, thrust into the heat of battle, Margaret experienced what she described as her ‘first taste of the risks of street fighting. Soldiers on top of the Hotel Shelbourne Hotel aimed their machine guns directly. Bullets struck the wooden rim of my bicycle wheels, puncturing it. I knew one might strike me at any moment, so I rode as fast as I could. My speed saved my life.”

On Wednesday, April 26, Margaret, wanting to be more involved in the fighting, argued with Commandant Michael Mallin. She wrote: “We had the same right to risk our lives as the men… in the constitution of the Irish Republic, women were on an equality with men.” Mallin acquiesced and Margaret was given a uniform of green moleskin and ‘assigned a loophole through which to shoot… it was good to be in action.’ She recalled: “More than once I saw the man I aimed at fall.”

On a mission to burn buildings, Margaret was shot. “‘It’s all over,’ I muttered, as I felt myself falling.” She had sustained two gun shots to the right shoulder, and one would a quarter inch from her spine. She contracted pneumonia while being treated, and her recovery was further hampered by a doctor who she wrote ‘made the mistake of using too much corrosive sublimate on my wounds, and for once I knew what torture is. The mistake took all the skin off my side and back.’ She lay in the College of Surgeons for four days, nursed by Countess Markievicz.

On Sunday, April 30, word was delivered by despatch that a general surrender had been decided on. Markievicz wrote Margaret ‘begged the Commandant, who could make the decision for our division, not to think of giving in. It would be better, she said, for all of us to be killed at our posts.’ She continued: “He [Commandant Mallin] must have decided to give in at once, for in less than an hour an ambulance came to take me to St Vincent’s Hospital.. I urged them again and again to hold out.”

At a convention of the organisation on February 5, 1922 there was debate on a resolution by Mary MacSwiney, ‘reaffirming allegiance to the Republic and calling upon the Women of Ireland to support in forthcoming elections only those candidates who stood true to the existing Republic declared in Easter Week, 1916.’ While Min Mulcahy and Jennie Wise Power defended the Treaty as a stepping stone to full independence, most attendees at the convention remained resolutely anti-Treaty. Margaret in her contribution to the debate, said it was ‘not a question between the Republic and the Free State. It [was] a question between the Republic and the British Empire.. Mrs Wyse Power asks are we going to oppose an Irish Government? Once a man takes an Oath of Allegiance to England, he is no longer an Irishman in my opinion.’

In March 1922, the Republicans had taken over the Four Courts in Dublin and Margaret was in charge of Cumann na mBan operations with headquarters at Tara Hall. She was initially based at Barry’s Hotel off O’Connell Street, where she worked as part of the Quartermaster General staff of the IRA. She set up two HQs one on the south and one in the north inner city, as she thought she would be ‘cut off by the river.’

With the fall of the Four Courts the whole of the Quartermaster General staff was gone. Margaret received a note from Liam Mellows who was in Mountjoy Gaol asking her to carry on the work. Margaret was now effectively Paymaster General of the IRA, and would continue doing this work, along with her other Cumann na mBan work, until December 1923. She worked closely with Austin Stack who became the IRA’s Director of Finance. As part of her work, she paid all the Active Service Units, paid the Adjutant General’s staff, and all the departments. She had a team working with her including couriers—mainly Cumann na mBan women—working for the different officers, particularly after the Republican Government was set up in October 1922.

Imprisoned
In December 1922, Margaret had been arrested, charged with possession of a revolver and imprisoned in Mountjoy Gaol. Her friend, Nora Connolly O’Brien, took over her position as Paymaster General of the IRA until she, too was arrested in January 1923, and was also imprisoned.

More than 60 Cumann na mBan members were arrested during the Civil War. In October 1922, Richard Mulcahy, Commander in Chief of the Free State Army, set up military courts. Anyone arrested carrying guns or ammunition faced imprisonment or a death sentence, while carrying documents relating to activities of Free State authorities was an act of treason and carried a sentence of imprisonment. This directly impacted on Cumann na mBan as their main work was despatch carrying and arms transportation. Whilst the threat of execution was not used against any woman carrying a gun—Margaret was one of those—it was used against men.

By February, all female internees were moved to Dublin and held in either Kilmainham or Mountjoy Gaols. By that stage, Margaret had been in Mountjoy for two months. The women in both prisons organised themselves, retaining the structure of their organisation in the form of prison councils. In Mountjoy overcrowding was a severe problem and the women protested. Many women there were well known activists, including Máire Comerford, Margaret Buckley, Sighle Humphries and Dorothy Macardle. After the overcrowding in Mountjoy had been relieved by the transfer of prisoners to Kilmainham in February 1923, the remaining prisoners demanded the restoration of privileges. When this was not forthcoming, 12 prisoners—among them Margaret Skinnider—went on hunger strike. After seven days the strike was called off, and the Governor restored letters and parcels. Margaret (above) continued her time in Mountjoy until all the women were transferred to the North Dublin Union on May 3, 1923. As with Kilmainham and Mountjoy, a temporary Prisoner Council was convened and Margaret was the Director of Training.

Conditions continued to decline until September 21, 1923 when Mulcahy announced that all female Republican prisoners would be released. Margaret, however, was still in the North Dublin Union (NDU), along with more than 250 women. The war had been over since April, yet new internees were still arriving and others who had been in prison for many months, remained incarcerated with no sign of release. As a protest at their continued incarceration male prisoners around the country began to go on hunger strike. In the NDU, the women on hearing of the male hunger strikers, held a council meeting to decide their own course of action. There wasn’t a consensus on whether a hunger strike was beneficial. However, on October 24, five of the 84 women decided to go on hunger strike. Margaret had already undertaken three hunger strikes while in prison (one in Mountjoy and two in NDU), and it seems she did not join this one, although she remained, like the other non-strikers, supportive of the women on strike. Margaret was eventually released on 1 November 1923. She went home to join her partner and comrade, Nora O’Keefe at their house in Fairview. She had spent almost 11 months in jail.

Fitting tribute
In his concluding remarks Mr Coyle took the opportunity to congratulate the Margaret Skinnider Appreciation Society for all their dedication over seven years. He then presented a Highland Quaich (cup of friendship) to Pat McKenna on behalf of the 1916 Rising Centenary Committee (Scotland), as a token of esteem, for his expert craftsmanship in constructing a fitting monument to the patriot.

At the conclusion of formal proceedings and before refreshments at Cornagilta School, local teacher, Sonya Hackett played the national anthem on bagpipes.