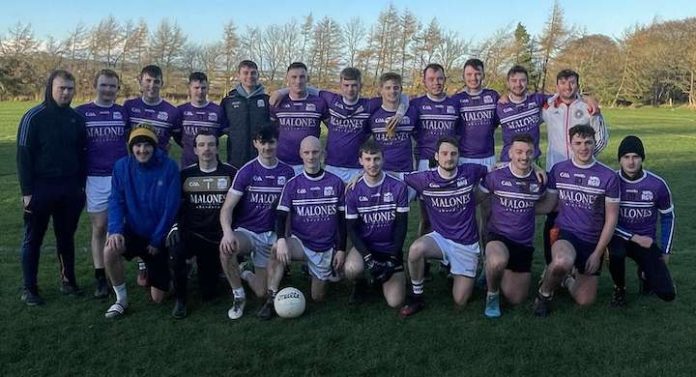 SOME 24 long months after the Scottish University League last being awarded, RGU retained their crown and simultaneously completed a miraculous five-in-a-row by defeating rivals Herriot Watt with a scoreline of 2-11 to 0-3.

It’s an achievement made more impressive by the fact not one player on the squad was involved in either of the first two leagues won or the 2017 British Championship side, which is testament to the immense work put in by several generations of players and volunteers in Scotland’s north east.

Herriot Watt travelled to Sheddocksley to play in what can only be described as poor footballing conditions, eager to avenge an earlier league defeat and keep their own title ambitions alive.

RGU controlled the opening exchanges, however the soft underfoot conditions and inclement weather played into the visitor’s dogged defensive game plan. Despite laying siege to Herriot Watt’s goalmouth RGU’s forwards struggled with a strong headwind in a crowded attacking half for much of the first quarter before Conor McAuliffe
managed to convert under pressure to open RGU’s account.

Herriot Watt began to settle into the game after the first water break and looked dangerous on the counter attack. They were unlucky to come up empty handed as heavy challenges came in—several courtesy of abrasive midfielder Alan Camon—with both teams looking to give themselves an edge when scores were at a premium.

A half-time score of 0-2 to 0-0 to RGU was a testament both to RGU’s wastefulness in front of goal and Herriot Watt’s effective use of the blanket when RGU’s possession really should have seen them farther ahead.

With a kick of the ball between the sides and all still to play for, the second half began in better weather and what had been a cagey, possession-based game started to open up.

Finding ways to unlock the Herriot Watt defence was due in no small part to the impressive running platform of Michael Devine, Kyle Larkin and Joe Staed and RGU converted their possession advantage into several fine scores to build up a 0-6 to 0-1 lead as Herriot Watt got on the scoresheet from a placed ball.

With still no quarter given from either team, tensions threatened to boil over several times as Herriot Watt went into the final water break feeling the vital two points were still on offer should they find a purple patch.

However, this never materialised as a ruthless RGU raced out of the blocks. The trojan defensive effort put in by Herriot Watt began to show in their legs and a flurry of points from Cian Hartmann among others and two well-taken goals shattered any hope of a Herriot Watt comeback.

As the game fizzled to its conclusion RGU pulled away to a convincing 2-11 to 0-3 win in a game many neutrals present wouldn’t have felt was ever in doubt despite a spirited and commendable display from the visitors.

Both sides now look to build towards the season’s main prize of the British Championship in the new year, but the men in purple (above) ensured the Scottish League title wintered once again in the Granite City.