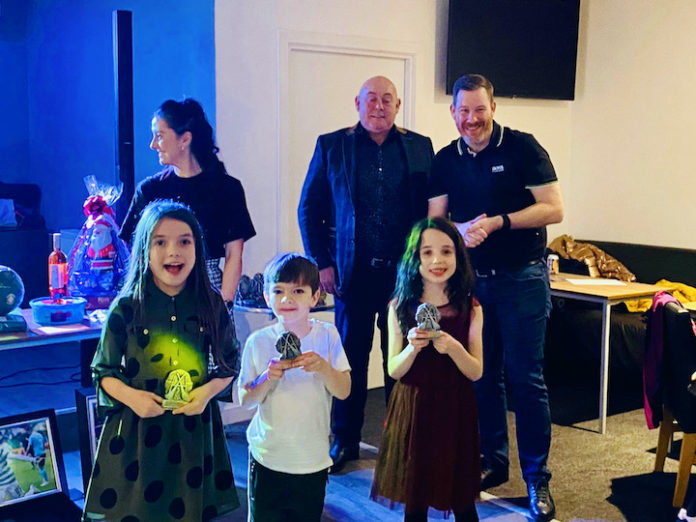 GAA clubs across Scotland celebrated the players, officials and volunteers who make their efforts possible throughout the year as club awards were handed out at the end of a successful season amid the challenges of the Covid-19 pandemic.

The efforts from the county board and in clubs up and down the country ensured that the unprecedented challenge of the pandemic was met as matches and competitions were held successfully and safely despite the new protocols that governed sport in Scotland for much of the year.

The biggest cheer on the night was reserved for Niall Horkan, who picked up the prize for the Senior Men’s Players’ Player of the Year.

“What this man has done for this club both on and off the field will live long in the memory of all those privileged enough to have played alongside him in the field, or who simply have known the man,” the club said. “His drive and willingness to be an integral figure in this club will be sadly missed next season. But he leaves the club in a much stronger place for his work.”

Tír Conaill Harps made sure that their awards recognised the great work being done at underage level, with a thriving youth section at the club seeing involvement across all age grades.

Members of the senior panel, including the club captain, were in attendance to help distribute the award to the Harps of the future, as the club gathered in Christ The King Church Hall in the city’s south side.

“Our mini harps U8s section were provided with medals for all their dedication to training all year and showing great attitude and improvement in their Gaelic football skill,” Harps said. “The U15s and U17s boys celebrated their Most Improved and Player of the Year awards, with both squads making great strides this year we are excited to see that squad of boys grow stronger next year.

“The highlight of the awards night was celebrating the U12s Scottish Championship win, and the presentation of the combined U10s/12s All Star Team , for which the lucky 15 players voted for by their coaches were presented with their All Star awards.”

The Harps winners were as follows:

There was a strong focus on youth from Ceann Creige in the east of the city, as the club hosted an evening at the Belvedere Bowling Club to honour those whose efforts have made the launch and early years of the club (above) in Glasgow such a success.

“Last night we hosted our annual awards night to recognise the achievement of our youth players,” the club said. “Whilst we never had the number of matches we liked, due to obvious factors, it was great to come together and celebrate people still togging out week in, week out. We are looking forward to a busy and packed 2022.

“Thanks to all the players, parents, families and friends that came out to support the night. A massive thanks go to Belvidere Bowling Club for all their help and support. It’s just a fantastic venue and one we definitely will be back to. Also a massive thank you to our wonderful DJ Gerry McMahon and to our club sponsors for coming out to present the awards.”

Glasgow Gaels also recognised the efforts of their club members in their awards night in the Clydebank Community Sports Hub, with the club dishing out their awards on the site of so many of their recent special achievements.
Boasting a focal point which is the envy of so many others in the GAA in Scotland, Gaels continue to build a community spirit at at the club and were delighted to bring their members together for their celebration.

“Congrats to our POTY winners who picked up their awards at our end of year social,” Glasgow Gaels said. “Commitment, leadership and quality are in abundance amongst this list of deserving winners—well done!

“A special mention to our managers of 2021: Jimmy, Damien and Mick for the men’s teams and Darragh and Leo for the ladies’ team. The time and effort they gave this year had no bounds and we are thankful for all that they do for this great club.”

The Glasgow Gaels winners were as follows: