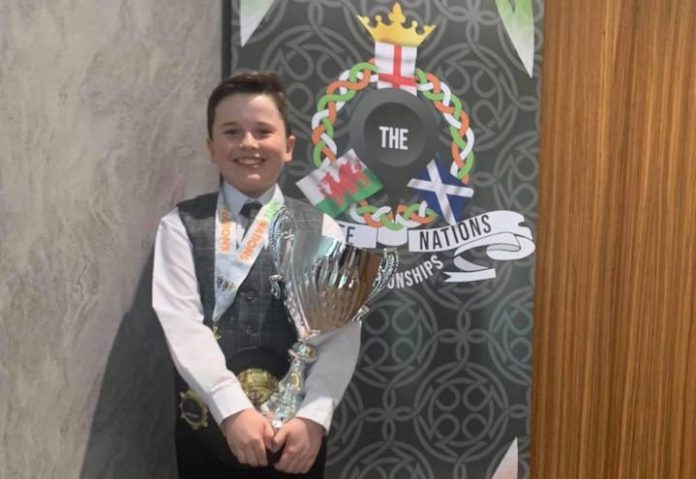 IRISH dancing schools throughout Scotland were toasting successes at one of the newest additions to the dancing calendar recently.

One such showing came from Damien Fisher (above), a talented young dancer who belongs to the Sarah Frances Smith School of Irish Dancing and has been quickly rising through the ranks. Damien cemented that rise by being named the Three Nations Champion in the Under 15 Boys category, an achievement which led his teacher Sarah Frances to declare that ‘she couldn’t be prouder of him.’ There were also strong showings from the school’s Sophia Grace Small in the Under 9 Mixed competition, Olivia Erin Small in the Under 14 Girls championship and Erin Sharp who finished fourth in the Under 19 Ladies category.

“It was a truly fantastic long weekend, filled with really beautiful dancing, loads of laughter and tonnes of fun,” Sarah Frances said. “I am bursting with pride. The fantastic four danced their hearts out. They are such a credit to our little school and their lovely parents, who I know are also bursting with pride. I absolutely love how you all support each other—dance friends are the best friends! Thank you from the bottom of my heart for all your hard work, determination and dedication. I loved every second of watching the four of you dance and I am so glad to be back doing what we all love best.”

The Harrison School of Irish Dance were celebrating a back-to-back achievement from one of their young dancers as Ethan Farrell emerged triumphant in the Under 12 Boys competition to also become the Three Nations Champion. The week previously, Ethan took the spoils in the same age group category at the Kelly Hendry Feis.

Other notable success for the school came from Payton Murray and Rachel Gault who finished second in the Under 12 Girls Prelim and Under 13 Girls prelim competitions respectively, while the performances of Ciara Miller (Under 13 Girls), Ailish Marshall (Under 13 Girls) and Nevaeh Murray (Under 8 Mixed) were praised by their teacher Susan Harrison.

“It was a great weekend and we have to thank the organisers for that,” Susan said. “Well done to all our kids, you are amazing role models for our new dancers starting their Irish dance journey.”

There were more Scottish Champions crowned at the event from the Sharon Taylor Irish Dance Academy, whose dancers always seem to be amongst the medals. Oscar Donnelly—fresh from his success at the Kelly Hendry Feis—became the Under 10 Boys Three Nations Champion, while Declan McLaughlin—who also took the top prize at the Kelly Hendry Feis—was crowned the Senior Mens Champion.

In addition to these successes, Georgia Mitchell became the Under 11 Prelim champion and there were second placed finishes for Kathleen Collins (Under 17 Girls) Dylan Stevenson (Under 18 Men) and Matthew Hughes (Under 15 Boys). Moreover, Keira O’Reilly finished third in the Under 10 Prelim Championship, while Niamh Rodgers finished fourth in the Under 12 Girls category.

“It was a fantastic weekend, in an amazing venue and was so well organised and run,” Sharon said. “The dancers had a brilliant time doing what they love after such a difficult and long time, so thanks to everyone involved in the running of this amazing event. You did a fantastic job thank you so much. The music was brilliant and it was great to see all the talent on stage. I am sure the judges were impressed with every single dancer who has kept going throughout this time.

“Last, but not least to our own crew. Cora who was injured and couldn’t dance but still came along to support us. Yasmine who was very sick but still got on stage and danced but missed awards. What a wee star!”

“Keep up the good work girls,” Caroline said. “Michelle and I are so proud of you all.”

The McLaughlin School of Irish Dancing also enjoyed being back in competitive action at the event, which saw Shannon Dyer from the school secure a second-place finish in the Under 8 Mixed competition and Siobhan Boles finish third in the Under 20 Ladies category.

Áine McGeehan, Freya McNab, Orla Maguire (all Under 9 Mixed), Mia Slicer (Under 10 Girls), Scarlett Sharp (Under 12 Girls), Eva Mannion, Teagan Giroux, (both Under 13 Girls), Anya Maguire and Niamh Stevenson (both Under 15 Girls) were also praised for turning in excellent performances at the competition.

“Our girls had such a fabulous weekend at the Three Nations Championship,” The McLaughlin teachers said. “It was a fantastic venue and the standard of dancing was excellent. We’re absolutely delighted to be back on stage. Thank you to the organisers for hosting this wonderful event and the opportunity for our girls to do what they love. We’re delighted with our results and very proud of you all. Special mention to Maria who had to withdraw through injury.”