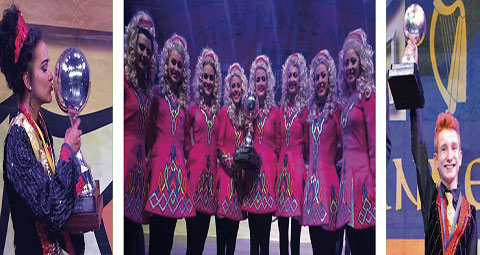 IRISH dancers from Scotland came back from the most prestigious competitive event in the dancing calendar feeling on top of the world.

This year’s World Irish Dancing Championships—now in their 47th year—were held in the Citywest Hotel in Dublin over eight days and saw elite dancers from more than 20 countries compete in solo and group categories in front of an estimated 25,000 spectators.
And those spectators will have been witness to the string of stunning successes from dancers from Scottish schools. The Caroline Greene School of Irish Dance celebrated Rohan Bole taking top spot in the Under 19 Ladies category (above left)—building on her win at the All Scotland Championships in the same category—before watching her also help the Senior Ceili team (above centre) defeat all-comers to emerge victorious too.

Declan McLaughlin from the Sharon Taylor Irish Dance Academy also had a fantastic tournament, coming third in the Under 18 Mens category (above right).

“It was an amazing week at this year’s World Championships,” an ecstatic Caroline Greene said. “We are so proud of our eight solo dancers and our three ceili teams who performed magnificently. Special congratulations must go to to our World Champion Rohan Bole. She has been with us for 15 years and this has not been an easy journey as every year she has been plagued with injuries. We always believed in her and knew her day would come. She is such a dedicated young lady with the best work ethic I’ve ever seen and she is such a wonderful role model for the ‘wee greenies’ at class.

“Congratulations also to our Senior Ladies Ceili team on winning for the second year in a row. They danced fabulously and all worked so hard.”

For her part, Rohan was overjoyed after finally having achieved her dream and was fulsome in her praise for Caroline and her other teacher Michelle Greene.

“It’s almost indescribable how I felt when I won the World Championship. After nine years of hard work and determination there were tears of stress, happiness and relief all rolled into one,” she said. “I want to thank the most amazing teachers who never gave up on my biggest dream and worked with me to finally reach it. I love them both so much and I really don’t know where I would be without them.”

Ciara Dickson, from the Caroline Greene School, also enjoyed an excellent sixth place finish in the Under-21 Ladies category.

Sharon Taylor was similarly delighted with her student’s third place finish at the event.

Declan himself was delighted with his performance in Dublin and took time out to pay tribute to Sharon for her passion and dedication in helping him to achieve his top three finish.

“I felt I had performed my best and did everything that my teacher asked of me,” he said. “We had worked so hard together on perfecting my dancing leading up to worlds. My teacher’s choreography is amazing and I love performing it for her. Sharon teaches with such passion and dedication and I wanted to do my best for her. I felt really good after each round I danced and had a brilliant reaction from friends and family. The pinnacle was getting up there in that third spot and winning the globe. Two places up on last year’s results and I couldn’t be happier.”