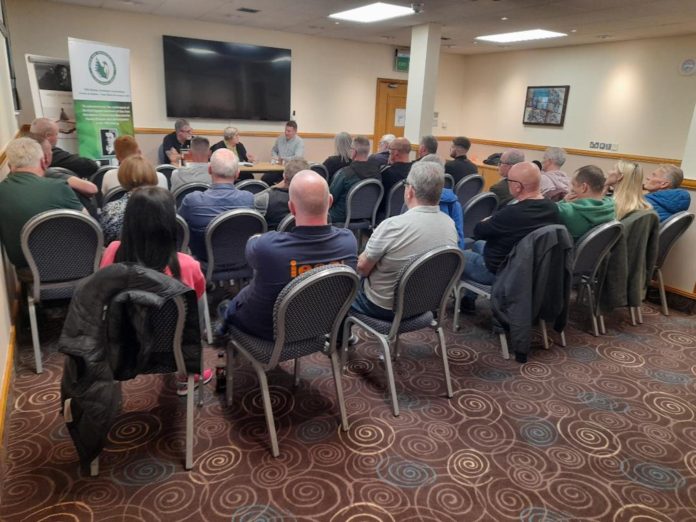 THE story of legendary IRA figure, Séumas Robinson, who fought in the Easter Rising and rose to prominence in the War of Independence and Civil War, was outlined by Dan Jack at the recent Glasgow launch of his book, Citizen Soldier, From Sevastopol Street to Soloheadbeg: Séumas Robinson and the Irish Revolution.

Maggie Chetty, Chairperson of the 1916 Rising Centenary Committee (Scotland) introduced the speakers, Jim McVeigh and Dan Jack, to the audience, some of whom travelled from Dundee, Edinburgh, Coatbridge and Wishaw to be present.

Jim McVeigh who is a historian, writer, ex-POW, organiser for SIPTU and co-founder of the James Connolly Visitor Centre, explained the background to the Centre which is located only yards from where Connolly lived on the Falls Road in Belfast. Its mission is to ensure that a new generation of Irish citizens and those who visit it from across the world are introduced to James Connolly and his ideas.

The James Connolly Experience is an audio tour which will guide you through an interactive exhibition, which tells the story of Connolly’s life, from his birth in Edinburgh, to meeting his wife Lily in Dublin, to travelling across the United States spreading the gospel of trade unionism and socialism. Lasting approximately 40 minutes, the tour will introduce the visitor to many interactive features and immerse them in the story of James Connolly as they make your way through the centre.

The main speaker was the author Dan Jack who was well placed to write a biography of Séumas Robison. He is a qualified historian and relative of the patriot, who resides in the Clonard district of Belfast, where Séumas and his brother Joe spent their formative years before the family emigrated to Glasgow.

Dan’s enthusiasm for his subject was evident as he described key events in Séumas’ military and political career in Ireland’s fight for freedom. They included his part in the Easter Rising as a member of one of the overseas units of the Irish Volunteers from Glasgow, his incarceration in Reading Jail and Frongoch Internment Camp, his military record as Commandant of the Third Tipperary Brigade. Robinson’s decision to adopt the anti-Treaty side in the Civil War and promotion to O/C of the Second Southern Division was also recalled. The launch ended with a question-and-answer session followed by a book signing by the author.

The 1916 Rising Centenary Committee (Scotland) wished to place on record its thanks to everyone who attended the book launch and are especially grateful to Cairde na hÉireann for the practical assistance rendered.