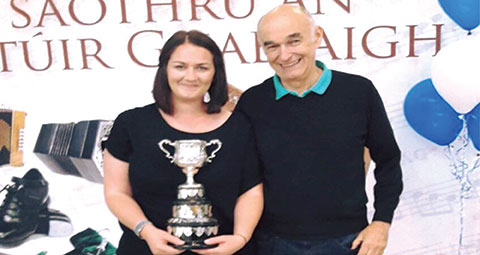 THIS year was a particularly successful year for Scotland at the All-Ireland Fleadh in Ennis and it was especially poignant that the Irish Minstrels branch of CCÉ equalled their highest medal tally on their 60th anniversary year.

Over 450,000 people flocked to the town of Ennis in Clare for the annual event, which has grown in to a week-long festival featuring a whole range of fringe events. Taking time out from their busy schedule performing with Ed Sheeran, Beoga performed a fantastic concert and another highlight included the Comhaltas National Folk Orchestra featuring musicians from all over the world performing a new stunning show titled Legacy for a 2000 strong crowd in one of the two massive ‘Domes’ erected for the Fleadh.

The main purpouse of the Fleadh however, is the competitions, which have been taking place since 1951 and whose winners over the year feature undoubtedly the finest artists in their field. The Senior Fiddle competition is arguably the highest profile solo competition at the Fleadh, and Glasgow has in the past celebrated some incredible success in this discipline with co-founder of the Irish Minstrels Branch Jimmy McHugh, and in more recent times has seen Johnny Canning take the top prize. In 2017, the Coleman Perpetual Memorial Cup has made its third journey back to Glasgow with prominent Glaswegian musician Roisin Anne Hughes (above with teacher and mentor Frank McArdle) emerging victorious from an unusually strong competition this year.

Of course the results mark a fantastic recognition of the strength of Irish culture here in Scotland, but the Fleadh really is about taking part and it is an incredible achievement to be able to send hundreds of musicians, singers, dancers and story tellers to represent the country at the highest level.

This year for the first time, too, Glasgow was able to boast two bands in the Senior Ceili Band competition, which is the single largest competition at the Fleadh with the 2000-strong crowd each paying €20 just to get in the door. With only two places afforded to Britain, it was a fantastic achievement to have both St. Roch’s and for the first time St James the Great Ceili Bands perform in the Giant Dome. Although both were unfortunate to not be amongst the medals this year, it is a sure sign that traditional Irish culture in Scotland has never been stronger.

Paddy Callaghan is a former BBC Radio Scotland Young Traditional Musician of the Year. He is the Scottish Region Development Officer for Comhaltas Ceoltóirí Éireann