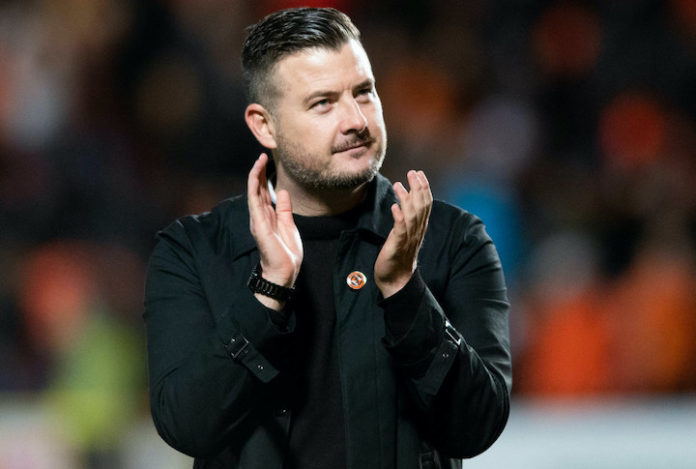 There’s not been a lot to shout about for Dundee United fans over the last few weeks, with Thomas Courts’ side faltering of late and slipping down the Scottish Premiership table into fifth place.

With no wins in four games now and a trip to Ibrox on the horizon, it’s becoming difficult to see where a win is coming from. Sure, there is no shortage of endeavour from the squad, but the goals for column is severely lacking with only one recognised striker in Nicky Clark fit at the moment. Add to that the fact that Clark’s goal tally this time last year was eight, whereas he has been on the scoresheet only twice so far this season. United will undoubtedly have to go shopping after Christmas to fill that much needed goalscoring void, which is a tall order in itself with obvious competition from other clubs and leagues looking for a top marksman.

November didn’t start great with a demoralising 5-2 defeat to Hearts at Tynecastle which saw basic errors at the back contribute to at least two of the goals. While the scoreline maybe flattered the Gorgie side United simply weren’t at the races on the day and had to put it down to a bad day at the office.

Courts’ side were to make amends the following week though with a hard fought 1-0 victory in a feisty northeast derby against rivals Aberdeen with US midfielder Ian Harkes netting the only goal of the game with ten minutes left. The game, though, was overshadowed by a man being sent off for either side in controversial circumstances.

First to go was Calum Butcher of United for an altercation with Aberdeen’s Christian Ramirez on the half-way line. Cast your mind back a few years to the famous image of Vinnie Jones and Paul Gascoigne and you’ll get the picture of the nature of the offence.

The second red went to Aberdeen’s Funso Ojo just before half-time with the player crashing into a barrier due to momentum only to be pushed in the chest by an opposing fan who had encroached the barrier to do so. The player’s natural reaction was to ‘have a word’ with the offender leaving referee Bobby Madden to apply the strict letter of the law and dismiss the player. A harsh decision, but good to see United doing the right thing and removing the offender’s season ticket as a result of this unacceptable behaviour.

Buoyed by getting back to winning ways, United hit the road at bottom side Ross County, which ended in disappointment after conceding a late equaliser with the game ending a goal apiece. There were shades of the old United where concentration levels drop in the final minutes—a practice that has cost the team dearly over the years.

A midweek trip to Motherwell brought no joy either with a sublime Tony Watt strike earning the home side all three points.

If the Motherwell result was disappointing, United would find their next opponents Celtic, in a rampant mood on their visit to Tannadice for an early Sunday kick-off. Even though the game ended 3-0 to the visitors, it realistically could have been a cricket score. Squandered chances and some last-ditch blocks from the United defence and ‘keeper Benji Sigriest managed to keep it semi-respectable, but it was a poor show from the Tangerines, who were simply outplayed, outclassed and outfought in every department.

To make matters worse for United, midfielder Butcher was given a retrospective red card and three match suspension for a horrific tackle on Celtic’s Turnbull, which was somehow missed by the officials.

A 1-0 loss at home to Livingston compounded the Arabs’ misery with the only goal coming from a penalty, after Jeando Fuchs had been caught in possession and tried to make amends with a rash challenge, which gave the ref no option but to award the spot-kick.

Courts now has the unenviable tasks of rallying his troops and trying to get confidence back after this poor recent run of form. It seems almost like an age ago where United were looking like a comfortable top six side and Courts (above) will have to try and get the best from this current squad going into a busy festive period, which includes a derby.

It can be a short lifespan for a football manager—let alone an inexperienced one—before the inevitable knives come out. Unfortunately for Courts, some of the ‘told you so’ Arabs are already beginning to sharpen them.