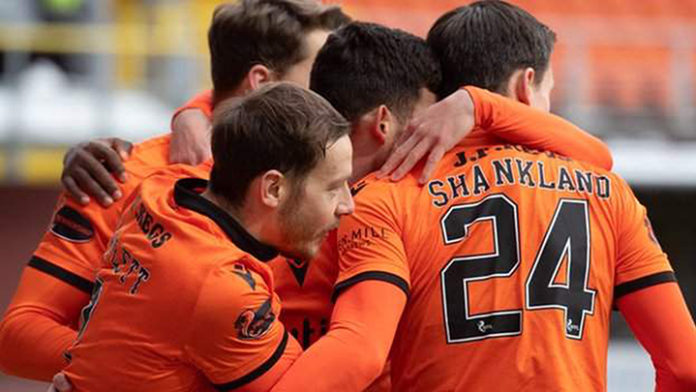 WITH four away games looming last month for Dundee United, it was always going to be a tall order picking up points on the road after a spate of poor results. February, then, couldn’t have started much worse with a defeat to lowly Motherwell. Micky Mellon’s side fell behind to two avoidable first-half goals and although there was a spirited fightback from the Tangerines in the second period, it was the home side who held out for a 2-1 win.

What was evident here was the lack of goal threat on show—despite a three-pronged attack—and a change in shape was required for the next game against Ross County in Dingwall, which now took on a huge significance for both clubs in their quest to avoid the play-offs or the dreaded drop.

United, though, have a decent record against the Staggies, winning all previous four games and, yet again, came out on top and left the Highlands with maximum points in the bag. A welcome change in formation yielded a goal from Lawrence Shankland, before centre-half Ryan Edwards latched on to a corner, which gave the big Scouser his second goal in as many games from a set piece.

After two defeats at the hands of an in-form Livingston so far this season, United perhaps burst a few bookies’ coupons in their next encounter by securing a great result—an empathic 3-0 victory (above). A wonderful start for United saw young Argentinian winger, Adrian Sporle, open the scoring with a fine effort in the very first minute, before the Tangerines were reduced to 10 men with Peter Pawlett receiving a straight red card for a clumsy tackle. Pawlett’s dismissal, however, did little to deter Mellon’s side and within minutes they were two up with Shankland latching on to a superb through ball from Ian Harkes who had just entered the field as a sub. Indeed Harkes would have another key part to play in the game when the American was brought down as the last man, which also reduced Livvy to 10 men just after the hour mark. Shankland would put the game to bed in the 85th minute with his third goal in two games after winning a header, racing past the defender for the loose ball, cutting inside and coolly picking his spot beyond a despairing goalkeeper, showing exactly what he has in his locker and deservedly earning him the man of the match award. Consistency, as United fans know, has been a problem this season and for many Arabs, this was the kind of performance, they would love to see week-in, week-out.

Heartened by the Livvy result, United would go to table-toppers Rangers full of hope and they did indeed hit the ground running with a series of chances that could have—on another day—seen them go ahead. Alas, a couple of first-half goals put the home side in charge and United would finish the game on the end of a 4-1 defeat. No shame here for Mellon’s men, who had the wind knocked out of their sails with a couple of deflected goals and the consolation of being only the second side to notch a league goal at Ibrox this season when Marc McNulty fired home for a late consolation.

A trip to Kilmarnock would see out the month’s activity with the Ayrshiremen still seeking their first win under new manager Tommy Wright. United took the lead through a deflected Sporle shot, but it was improving Killie who dominated the proceedings for much of the game and were more than value for their point. The 1-1 draw did little for any aspiration United have of a top six finish and it now looks increasingly likely they will fight it out in the bottom half of the table, with perhaps the most difficult run in on paper, with home games against Celtic and Aberdeen completing the fixture list to the 33-game mark.

United have at least given themselves a fighting chance by opening up a 10-point gap between themselves and the bottom two and the general consensus is that another win or two should see them safe for this season given the fact that teams will invariably take points off each other.

Depending on other results would obviously be a foolish strategy, but as current standings go, only Motherwell in the bottom section of the table have managed to defeat United so far this season. Mellon’s side have demonstrated they are than capable of achieving this particular short-term goal of maintaining Premier League status over the coming weeks.