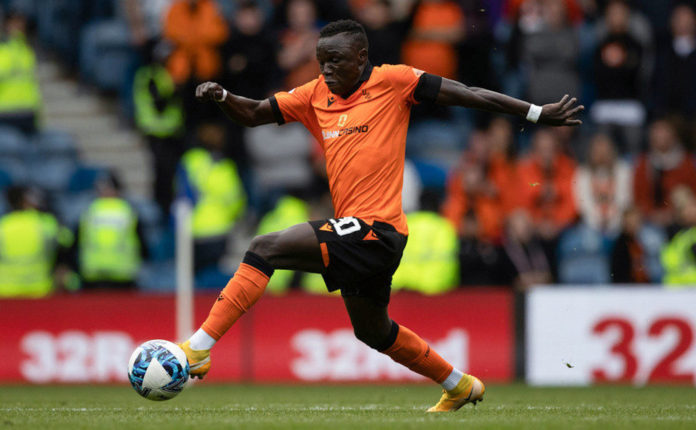 AFTER the international break last month things are still looking pretty grim up at Dundee United with the club firmly rooted to the bottom of the Scottish Premiership and no league wins so far this season.

Another home defeat to St Johnstone was just the latest setback for Arabs to endure. United started well in the Tayside derby, but a lapse in concentration from a statuesque back four let in Saints’ striker Stevie May who finished well to put the Perth side 1-0 up. A second, close to half-time from midfielder Mellberg saw the Tangerines booed off the pitch by home fans at half-time who are understandably frustrated with the offerings on show. A late flurry from United after making several changes saw sub Tony Watt grab only his second goal in Tangerine, but it was too little too late as St Johnstone ran out 2-1 winners.

Worrying times indeed for Arabs as that result meant three sides that finished in the bottom half of the table last season have already come away from Tannadice with all three points —with St Mirren and Livingston having already recorded victories earlier in the season.

Liam Fox, who was assistant to former head coach Jack Ross, is the new man at the helm for United and despite bigger names being brandished around for the job the club have gone for an internal appointment again. It may well be a case of better the devil you know as it was with Tam Courts. But many view it as the cheapest option available.
In fairness to Fox, he appeared to have steadied the ship a little during his caretaker period—after the departure of Ross—with a couple of decent performances at Motherwell and Livingston, a game that saw United progress to the next round of the League Cup. And, although his side were beaten 2-1 at Rangers, there were signs of small shoots of recovery as the Tangerines put in a decent shift on the day.

The major highlight was the introduction new boy—Ugandan Sadat Anaku (above)—up front, who managed to unlock the Rangers defence with his first touch of the ball and provide an assist for full back Liam Smith to net his first of the season and set up a tense and nervy finish for the Ibrox side who managed to see out the game for the victory.

So what do we know about new gaffer Liam Fox? Well firstly, at just 38-years-old he is the Scottish Premiership’s youngest manager. He has had spells at Hearts as youth team manager and caretaker head coach and worked as an assistant to David Martindale at Livingston before joining United in a similar capacity last year. His only full managerial role has been at lowly Cowdenbeath where he left after a 10-month spell by mutual consent. So it’s fair to say there is an element of calculated risk involved with the appointment not to mention the immediate challenge of dragging United from the doldrums.

His first three games in charge are all at home and having lost the first to St Johnstone, Aberdeen and Hibs are up next with a cup tie away at Livingston sandwiched in-between.

Alongside Fox, will be Stevie Crawford who returns to full-time football 16 months after he quit as Dunfermline Athletic boss and had stints at Edinburgh city and East Fife.

So in summary, there is no doubt Fox has his work cut out and morale is visibly at low ebb with the squad of players he currently has at his disposal. The only positive at this early stage is that Kilmarnock and Ross County are struggling as well and a victory would bring United back into the mix.

That elusive win, though, is very difficult to envisage at this precise moment in time. But, if it doesn’t happen soon The Tangerines could easily find themselves detached at the bottom of the pile and staring life in the Championship straight in the face once again next season.