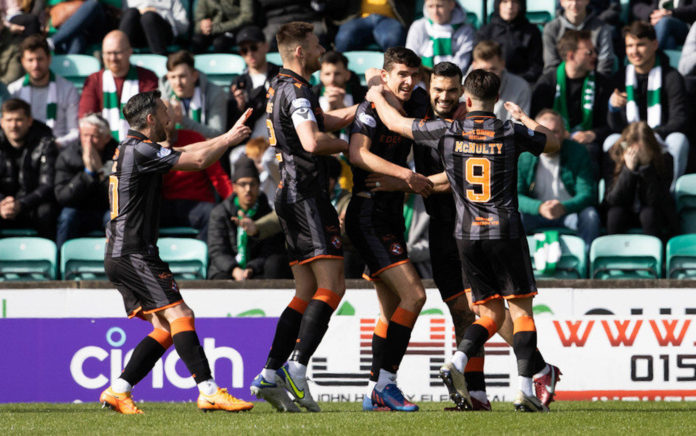 GOING into the last fixture before the split, Dundee United found themselves in the mix with no fewer than four other clubs all fighting it out for the coveted last slots in the top-six.

United—sitting in fourth position—had previously visited St Mirren before the International break coming from a goal behind to secure all three points in Paisley, where a 96th minute tap in from Marc McNulty produced total mayhem in the away end with virtually the entire United team jumping the barriers to celebrate with the travelling Arabs. The scenes were perhaps evidence of the level of the camaraderie and togetherness that head coach Thomas Courts has brought to the group of players. Before that, midfielder Dylan Levitt—on loan from Man United—had produced a cracker from outside the box to get United back on level terms and set up the grandstand finish.

So for the final pre-split game there was the small matter of the city derby to take care of with struggling Dundee FC calling at a sold-out Tannadice. United started well with a gift for Nicky Clark putting them 1-0 up at break, before Charlie Mulgrew unleashed an unstoppable free kick into the dark blues net to put the Tangerines in cruise control and well on the way to what was looking like another demolition derby. Dundee manager Mark McGhee had claimed Mulgrew’s strike was lucky and meant to be a cross much to the amusement of the United centre half who dismissed it as a ‘bitter’ comment in a post-match interview along with other humorous jibes. Those who have seen Charlie operate this season at United will tell you it was anything but a fluke as the man has a seasoned wand of a left foot.

So up to that point it was one-way traffic at Tannadice. But hold up, a mistake by the usually dependable Benji Siegrist in the United goal let the dark blues back into it before a swirling shot from pantomime villain Charlie Adam left the big Swiss stopper flat footed as the ball rattled in the net to get Dundee back on terms in a three-minute spell of what seemed like slow motion to the Arabs.

It was indeed ‘game on’ in the derby after that and, after a somewhat damp squib of a first half, we suddenly had a fire cracker on our hands. Both sides had chances to win it after that with United going close on a couple of occasions flashing balls in front of goal before the unthinkable almost happened with Niall McGinn hitting the top of the cross bar late on for the visitors. So 2-2 the final score with the dark blues no doubt the happier side taking a point that could prove precious in their quest for survival with their dogfight with Tayside neighbours St Johnstone—who fell heavily at Celtic Park to the champions elect. A disappointing result on the day for United having let a two-goal lead slip however, all the usual derby clichés apply with it being a good game for the neutral and so on.

As it turned out, though, the scoreline didn’t matter with results elsewhere going United’s way and Courts side had done enough to gain a top-six place for the first time since 2014. United will be buoyed by the fact that fourth place in the league should be enough for European qualification this year. Joining them in that particular challenge will be Ross County and Motherwell, who clinched their places on the final day also in dramatic fashion. United have done well this season against these sides defeating them both twice already so they are in with a shout at least for that Europa Conference berth. Losing out on the top section were Hibernian and Livingston—the latter United will not miss playing again as they failed to see them off in three attempts this season.

It’s a great feeling not to be involved in any sort of relegation fears and to be looking upwards for a change. Head Coach, Courts has, in his first season achieved that objective at least and gone one better than his predecessor Micky Mellon. So credit has to go where it’s due to him and the management team and the squad he has assembled this season.