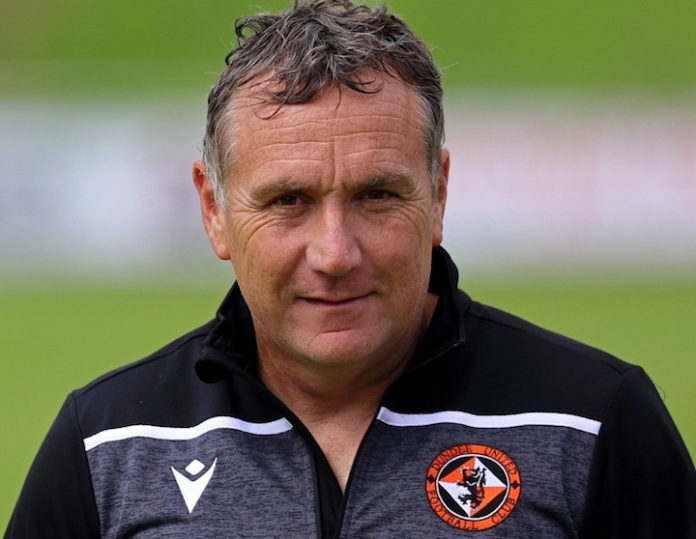 IT’S NOT quite ‘job done’ yet for Dundee United in their mission to secure their Premier League status as they will see out the final fixtures in the bottom section of the league.

It looks comfortable enough on paper, with United currently sitting 12 points off the automatic relegation place and 11 from the dreaded play-off, which they have become all too familiar with over the last few years. Until it is mathematically secured though, Manager Micky Mellon (above) and his squad will be taking nothing for granted.

United will head to the ‘drastic plastic’ of Hamilton and Kilmarnock in their first two games of the split and with those two clubs fighting for their lives at the foot of the table fans expect nothing less than a dogfight in both fixtures. Ross County and Motherwell will be the Arabs’ only post-split visitors before the team heads to St Mirren for the last day of the season, which will hopefully be no more than a day out in the sun for the Tangerines.

United may look back at the season and count themselves a little unlucky, having narrowly missed out on a top six finish by just a single point, but as a group they are definitely growing under Mellon who has them playing some decent stuff of late.

With only two games played in March, there was not much action for the first team, but a long- awaited win over Aberdeen was a boost for the club and its fans. United saw the game out 1-0 with an excellent team goal finished off by young Argentinian Adrian Sporle sealing the deal. Celtic had been the previous visitors to Tannadice a few weeks earlier with the sides playing out a 0-0 draw. The scoreline hardly did the game justice though with the visitors on top for most of the proceedings. However, had it not been for United keeper Benjamin Siegrist having an exceptional day, some resolute defending from the back four and the Celtic forwards leaving their shooting boots at home it could all have been a very different outcome.  Still, a point from the outgoing champions is always welcome and has been a while coming given our previous record in this fixture.

The American club are owned by Dundee United Hall of Fame legend Brian Welsh and the partnership will see both clubs allow academy players the opportunity to experience new environments, both here and in the US. Welsh—who won the Scottish Cup with United in 1994 and who played for the club 177 times as a centre half—is extremely excited about the venture and understands the tradition and reputation of a strong academy at United that has stood the club in good stead for many a year.

This forward vision attached to this project may just be the first of many with United’s sporting director Tony Ashgar looking to cast the net further afield in the global market. The American club have also rebranded themselves incorporating the badge and famous colours of the Tannadice Tangerines into their set up.