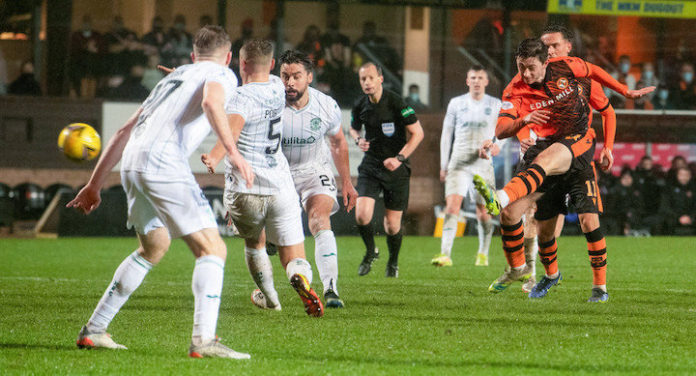 DUNDEE United’s slump in form continues as a recent run of poor results sees them move into the. bottom half of the table. This comes after the club’s most recent defeat to Hibs at Tannadice just before the winter break.

United’s record of late is simply dreadful, with five defeats in a row and only one win in their last 11 games. Head coach Thomas Courts certainly has his work cut out to ease the pressure on himself and his side for the second half of the season.

Lack of goals is the main problem with only Nicky Clark to call on up top as a recognised front man. So it’s no surprise then the club has been active in the transfer market and making a bold statement in acquiring the signature of Tony Watt from Motherwell on a pre-contract.

Watt, with 9 goals in 19 games this season for the Steelmen is currently the league’s top scorer and if the two clubs can come to an agreement we may see him in Tangerine sooner rather than later as part of a compensation and player swap deal.

Also on the radar is former fans favourite Lawrence Shankland who it seems is on his way out of Belgian football having only netted five times for SC Beerschot, who also look destined for the drop from the top league in the country. The loophole that United may exploit here is, as per UEFA rules, a player can only play for two clubs in any one season. and given the fact he has already played for the Tangerines earlier in 2021, it may be sensible move for all parties concerned in the short term to give him valuable playing time. United will of course face stiff
opposition from other Scottish Premiership clubs for the striker’s signature on a more permanent basis and he could choose to reunite with former gaffer Robbie Neilson at Hearts as an option.

United have been active elsewhere in the transfer market bringing in Ghana under-20 midfielder Mathew Cudjoe. The 18-year-old helped Ghana win the Under-20 African Cup of Nations in March, playing in all six tournament games. Showing his delight in securing the midfielder’s signature, sporting director Tony Asghar was quoted as saying: “He is a young and exciting talent that we can’t wait to watch develop further. As a club we are
continuously aiming to attract talented players as we have demonstrated we are a club that knows how to develop and give opportunities to young players, many of which have already established themselves as key elements in the current set-up under head coach Courts.”

On that front, Courts was left with no option of giving youth a chance for the trip to Rangers after a Covid-19 outbreak depleted the senior squad just before Christmas. A daunting trip at the best of times was made even tougher with United starting with no fewer than four teenagers on the day and an almost unrecognisable midfield line up. However rules are rules and if a team has 13 players, including a goalkeeper, over the age of 18, they are obliged to fulfil the fixture.

Certainly when the team line-ups were announced you could have forgiven even the most diehard Arabs who would have expected a pummelling from the Ibrox side. However Courts’ young side showed grit, determination and resilience before succumbing to a marginal defeat going down only to a penalty kick in the 71st minute after United defender Scott McMann had handled inside the box.

Courts was keen to heap praise on his young Terrors for going toe-to-toe with the league leaders and performances such as that one will give him the encouragement and motivation to utilise them again in the coming months.

Also joining United is Finland international goalkeeper Carljohan Eriksson who arrives on a free after three years with Swedish side Mjallby. Eriksson, who played 20 times in the Swedish top flight last year—with 13 clean sheets to his name—will for now fill the void left by Trevor Carson who has joined Morecambe on loan until the summer. This looks like good forward planning by United as it seems inevitable that current number one Benjamin Seigreist will move on at the end of the season when his contract expires.

United now have a chance to push on and start getting some points on the board with home games versus St Mirren and Ross County in succession before seeing out January with a trip to Celtic Park.