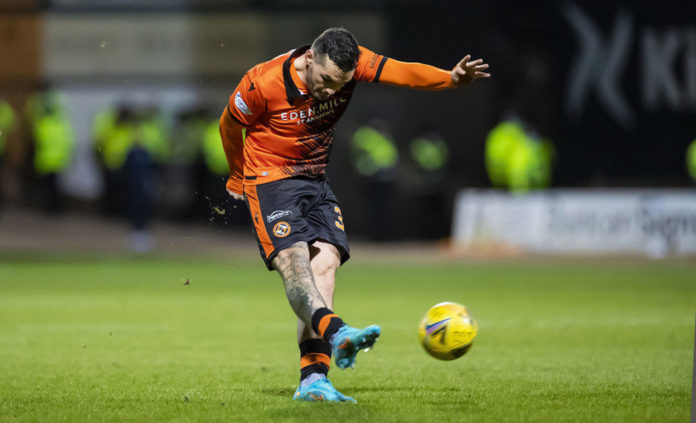 DUNDEE United started 2022 full of hope and expectation after securing the signature of striker Tony Watt from Motherwell when the clubs agreed a deal to release the player early.

United, as previously reported, are sadly lacking in front of goal, a problem that continues to plague Thomas Courts’ side. A 2-0 win at home to Motherwell saw Watt (above) open his account against his former club, along with a goal from Dylan Levitt, while an Ian Harkes goal against Partick Thistle saw United advance in the Scottish Cup.

Prior to that, an outing at St Johnstone ended in a boring 0-0 stalemate despite the hosts going down to 10 men for more than half an hour. United were still unable to penetrate the Saints’ resolute defence and offered little in the way of goal threat bar a Watt effort that clipped the post.

Watt has been a good acquisition though, of that there is doubt. His work rate and all round play is excellent, providing others with nailed on chances in front of goal. The statistic remains though, that he has scored more against United this season that he has for them with only one goal in five outings. However, this is more to do with the formation of the team on the pitch than the player himself, as he is being deployed as part of a front three and finds himself coming into the play very deep, which simply isn’t working for the Tangerines.

A dour Dundee derby produced no goals either, with the Dark Blues arguably the better side on the night at Dens Park. United could well have nicked it late in the game with Clark somehow shooting the ball over the bar from all of five yards out. To be fair that would have been harsh on Dundee who had the lion’s share of possession and shots on target. Not difficult really given the fact that United failed to register a single shot on goal in 90 minutes.

A trip to Celtic Park before the derby was always going to be tough one and although the Hoops were down to ten men, United failed to hang on for a share of the spoils as they did in their last outing there. Celtic managed to find a last minute winner, breaking through the wall that had taken a pounding all afternoon. While the timing of the winning goal—from an Arabs perspective—may have been cruel, there can be no complaints about the result on balance of play where keeper Benji Siegrist again had a very busy afternoon and had a big hand in keeping the scoreline respectable.

So, the highlights of the month came in form of an unusual late comeback at home to an improving Ross County side. With United trailing, a slice of luck gave substitute Nicky Clark the chance to level things up from the penalty spot. Clark would then justify his introduction deep into injury-time by heading home from a pinpoint cross from Watt to make it 2-1 to the Tangerines and complete his brace.

An extra-time win away at Kilmarnock in the Scottish Cup also showed the fighting spirit and determination that Courts side is capable of, with a Watt assist again providing Welsh midfielder, Levitt, with the winner to set up the fifth round tie away Partick Thistle.

Fans are of course becoming increasingly frustrated with the style of play Courts seems to have brought to the team. Sideways ‘possession’ football combined with lack of width or a plan B is not going down well with the Arabs in the stands. A far cry from earlier the season where grit and determination saw the team grind out results. It won’t get any easier either with Rangers and Aberdeen on the horizon, who will both be keen to overturn the 1-0 defeats United inflicted upon them earlier in the season.

United, though, are a different side from then and have also had some personnel changes with the loss of creative midfielder, Jeando Fuchs, who has made his way to the Championship in England with Peterborough United. He has been replaced by highly-rated Arsenal midfielder, Tim Akinola, on-loan until the end of the season. United have also brought in ex-Dundee, Wolves and, latterly, Fulham midfielder Kevin McDonald after a successful kidney transplant. The 33-year-old veteran, who has been capped five times by Scotland has been signed on a short-term deal also to try fill that midfield void.